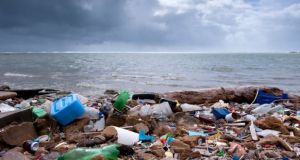 UK consumers use an estimated 13 billion plastic drinks bottles a year; three billion of which are incinerated, sent to landfill or end up as litter in urban areas, the countryside and the seas, officials said. Photograph: Getty

Pressure on the Government to introduce a deposit return scheme (DRS) for all drinks containers – whether plastic, glass or metal – has increased following the announcement that one is to be introduced in the UK.

Environmental groups insisted a DRS would reduce plastic pollution, help tackle littering and lead to higher recycling rates throughout Ireland. A successful producer responsibility scheme for waste packaging for recyclable material including plastic, which is co-ordinated by Repak, is already in operation here.

The Green Party welcomed the announcement by UK environment minister Michael Gove, and called for the Government to drop its opposition to a DRS.

Party leader Eamon Ryan said: “We warmly welcome the announcement from the British government . . . It’s vitally important that we reduce the levels of plastic waste ending up in the environment, and move towards a more sustainable, circular economy.”

The party’s Waste Reduction Bill, which passed second stage in the Dáil last July, includes a proposal for a DRS. “We want to see it pass through committee stage as soon as possible. If the UK can introduce a DRS, there is no reason why we can’t do the same. All we need is the political will from Government to see this common sense Bill enacted,” Mr Ryan said.

He was strongly supported by the environmental group VOICE. Its co-ordinator Mindy O’Brien said consumers strongly favoured such a move, and if the Government had any doubt about that, it should put it to a democratic vote in the Dáil. It was a key demand of many volunteer groups it was working with including more than 50 Tidy Towns’ groups.

VOICE favours a levy at point of sale on the basis it is “visible and allows consumers to make the choice of bringing their own containers or pressurises retailers to offer compostable containers”.

With the UK having similar producer responsibility schemes to Repak’s, “it blows the case [against a DRS ]out of the water”, she believed. There was a need, however, to ensure the burden was not put unduly on consumers. Producers currently pay the equivalent of .1 of a cent towards recovery and recycling of a bottle or can, which she said was not sufficient if one was to apply “the polluter pays principle”.

The EU’s new plastics strategy suggests member states should consider a DRS – but the option has met with resistance among Irish retailers and the recycling industry including Repak.

Minister for Climate Action and Environment Denis Naughten told the European Commission in February he was not convinced this would be cost effective model for Ireland. He said he would look at the option and await the committee’s verdict, but noted materials for such schemes – such as PET bottles – were of high quality and value in their own right, and had a ready market.

Mr Gove announced the move to introduce a DRS on Tuesday, subject to consultation. UK consumers use an estimated 13 billion plastic drinks bottles a year; three billion of which are incinerated, sent to landfill or end up as litter in urban areas, the countryside and the seas, officials said.

A total of 38 countries already have deposit return schemes which charge an upfront deposit on drinks containers, ranging from 10 cents in Sweden to 25 cents in Germany, that are redeemable when the container is returned, usually through “reverse vending machines”.

Mr Gove said: “We can be in no doubt that plastic is wreaking havoc on our marine environment killing dolphins, choking turtles and degrading our most precious habitats. It’s absolutely vital we act now to tackle this threat and curb the millions of plastic bottles a day that go unrecycled.”

He said the UK would “only take forward options which demonstrate they offer clear benefits, are resistant to fraud, and where costs to businesses, consumers and taxpayers are proportionate”.

UK Recycling Association chief executive Simon Ellin said it was likely to lead to a purer stream of material to recycle but warned: “We must be careful we do not throw the baby out with the bath water.”

“We need to understand what this will mean for the entire domestic recycling system. For example, how will local authorities replace what is a valuable revenue stream for them and could this make collections of other material such as cardboard and paper uneconomic for local authorities? Could this then make the quality of other material worse if collection systems cannot be properly funded?”