NTA will support plaza without two-way buses on Parliament Street 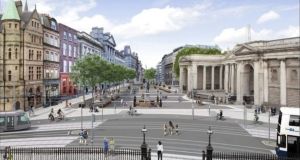 NTA said it supports Dublin City Council’s plan which would push Dublin Bus out of the city centre zone.

The National Transport Authority (NTA) is backing Dublin City Council in its standoff with Dublin Bus over the €10 million civic plaza plans for College Green.

The NTA had previously said its support for the council’s traffic-free plaza proposal was “contingent” on Dublin Bus being permitted to run two-way services on Parliament Street.

However, at the end of a three-week An Bord Pleanála hearing on the plaza, the NTA said it was now prepared to reverse this position and support the council’s plan which would push Dublin Bus out of the city centre zone.

The council has applied to the board to build the pedestrian and cycle plaza and ban all traffic, including buses and taxis, from accessing Dame Street through College Green.

Dublin Bus branded the plan “socially regressive” because, if buses were banned from crossing College Green, passengers from disadvantaged areas would have farther to walk to reach the city centre from their final stop, with large numbers of routes diverted to Winetavern Street west of Christchurch.

The bus company said it could accept the College Green ban only if it was allowed to run two-way services on Parliament Street, currently a one-way street.

However, the council said it had discounted two-way running on Parliament Street because of air pollution risks.

Early in the hearing, NTA director of transport investment Hugh Creegan said its support for the plaza was “contingent” on two-way bus running being facilitated on Parliament Street.

However, on the final day of proceedings Mr Creegan said the NTA would support the council’s position.

“Two-way bus operation on Parliament Street is our preferred arrangement following any closure of College Green to east west vehicular movement,” he said. “However, if two-way operation on Parliament Street is not permissible to be conditioned as part of this planning process, and I now understand that to be the case, we would in those circumstances recommend the granting of planning consent on the basis set out in the Dublin City Council application.”

Diverting buses to Winetavern Street was “technically workable” but not “the most desirable routing”, he said. If the council’s plans are approved, the NTA would assess other options for the required bus route changes, he said.

Ann Mulcrone, representing Dublin Bus, said Winetavern Street was “not a realistic option” for bus passengers, and would result in an “extreme severance of pedestrian linkage to