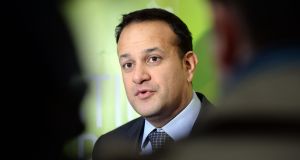 An application for EU funding for transport projects in the west and northwest was dropped following the intervention of Leo Varadkar when he was minister for transport, newly disclosed documents reveal.

Projects such as the western rail corridor and the upgrading of Galway and Sligo airports were deleted from an EU-wide transport programme in 2011 at the behest of Mr Varadkar, according to the documents.

The change went ahead despite Mr Varadkar being warned by a party colleague that it could close off the projects from EU funding “for good”.

The current Government, which includes a number of Independent Alliance TDs from western constituencies, is now seeking to reverse the exclusion of western projects from the European Commission’s Trans-European Transport Network (Ten-T) programme. However, the documentation obtained under freedom of information shows this has been stalled by a need to “assess the implications of Brexit”.

Mr Varadkar’s decision effectively deprived transport projects north of Limerick of any prospect before 2030 of qualifying for EU funding under criteria which dictates there must be a rail, road, air, sea and cross-Border elements.

The Ten-T programme has renewed relevance for Ireland in the context of Brexit, as it provides potential funding for direct transport links to the European continent.

In early 2011 the Fianna Fáil minority government submitted the western/Atlantic road and rail cross-Border route from Cork to Derry, including the Limerick-Foynes rail line and the N69 Limerick to Foynes road, for Ten-T approval, the documents show.

The first leg of the western rail corridor from Limerick via Ennis to Galway had been opened the year before, and was to be extended to Mayo in two phases.

After formation of the Fine Gael-Labour coalition government in 2011, the commission and Irish officials aimed to refine listing of projects for Ten-T.

Government officials expressed concern about exposing the State to additional expenditure due to the need for matching funding.

Maps redrawn between October 6th and October 11th, 2011, prioritised road-rail-port-airport infrastructure for Dublin, Cork and Limerick, with a link to Belfast, while the western half of the State north of Limerick was excluded.

In a response on October 9th, 2011, Mr Varadkar noted that a rail line from Dublin to Navan should be left in, while “the business case for the extension of the western rail corridor is much weaker but could be included at a later date if the spec changes”.

In February 2012, Mr Varadkar told the Dáil the Ten-T core network was “proposed by the European Commission and not by member states”.

A letter from EU transport commissioner Violeta Bulc to Fianna Fáil MEP Brian Crowley in November 2015 appears to contradict this stance; it said the commission’s role was to specify targets and criteria while member states retained “substantial sovereign rights” to decide on projects.

Removal of the N16 Sligo to Northern Ireland border element of Ireland’s Ten-T submission resulted in a letter of complaint to Mr Varadkar from the North’s regional development minister Danny Kennedy who warned of the possible funding implications for the A4.

The exclusion of the western arc also prompted an email to Mr Varadkar from then Midlands/North West MEP Jim Higgins in mid-December 2011, seeking its restoration as “failure to act now might mean closing off the project to future EU funding for good”.

Ten-T has two funding streams – for “core” projects prioritised for development by 2030, and “comprehensive” projects by 2050.

Projects must first be in “comprehensive” before approval for “core”. Redevelopment of Dublin Port’s Alexandra Basin and the Port of Cork are among Irish projects that have qualified.

The Taoiseach’s office did not respond to a request for comment.