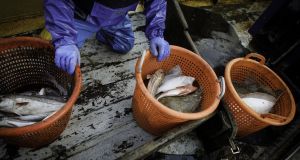 Ireland, the UK, Belgium, and the Netherlands had the highest percentage of their fishing quotas for 2018 in excess of scientific advice. Photograph: Annie Sakkab/Bloomberg

Ireland is one of the worst EU member states for overfishing in the Atlantic, and is undermining international efforts to restore fish stocks to sustainable levels, according to a report by the New Economics Foundation (NEF).

NEF conducts research on sustainable economics and has been analysing the outcomes of closed-door negotiations to set quotas by fishing ministers of EU member states. It evaluates total allowable catches (TAC) against the latest scientific advice.

Despite ongoing conservation efforts which are supported by Ireland, nearly half of assessed fish stocks in the North Sea are over-exploited, while seven out of every 10 quotas set across EU waters between 2001 and 2017 were above scientific advice, previous NEF analysis found.

In the negotiations last December for 2018, Ireland, represented by Minister for the Marine Michael Creed, “topped the league table of setting quota at 18 per cent [of their total TAC] above scientific advice”, Mr Carpenter said (this is based on 124 TAC decisions).

The continued practice of setting fishing quota above scientific advice “harms the environment, is short-sighted politics, and goes against the objectives of the CFP”, he added. “Ireland celebrated its achievement at ‘winning’ quota for its fishing fleet above scientific advice . . .Topping the overfishing league table should be criticised – not celebrated – as it comes at the cost of delaying the recovery of European fish stocks and more sustainable jobs.”

Fintan Kelly, BirdWatch Ireland’s policy officer, said NEF had once again highlighted Ireland’s position as one of the worst offenders in recent years within the EU when it came to overfishing. “Minister Creed’s decision to continue to drive overfishing is short-sighted and damaging to Ireland’s image internationally,” he said.

He added: “The sooner we recover fish stocks then the sooner we can reap the benefits of sustainable fisheries. With the 2020 deadline under the CFP to end overfishing fast approaching any further delays will mean that large reductions in quota will be required across many stocks in 2020 with potentially large socioeconomic consequences.”

Ireland, the UK, Belgium, and the Netherlands had the highest percentage of their fishing quotas for 2018 in excess of scientific advice.

The UK, Ireland, the Netherlands and Denmark were “worst offenders in terms of the total tonnage of TAC set above advice”. According to the NEF, ministers representing these member states have received the largest TAC increases above scientific advice in terms of tonnes and “are therefore the most responsible for impeding the transition to sustainable fisheries in the EU”.

“Ireland now must surely be considered among the most environmentally irresponsible fisheries nations in Europe having over the previous two years also ranked worst,” Mr Kelly said.

It has been estimated that by setting quotas below scientific advice Ireland would eventually increase landings by 200,000 tonnes and €200 million in value compared to 2014, he said. “This would translate into greater profits, higher wages and more jobs. It is clear that sustainable fisheries are not just a moral or legal obligation but are the greatest opportunity available for us as an island nation to grow Ireland’s blue economy.”

He added: “Every year Minister Creed postpones the recovery of our blue economy means potential profits lost. What’s more, the longer we delay making the necessary reductions in fishing quotas the larger the reductions will have to be across many species in 2020. A sudden slash in quotas would have potentially large socioeconomic consequences.”

A key barometer of the state of the marine environment in Northern Europe comes from seabirds, BirdWatch Ireland point out. Being reliant on fish for their survival and breeding success, seabirds are excellent indicators of the availability and distribution of fish and other marine organisms.

An assessment by OSPAR, a body set up by 15 governments and the EU to protect the marine environment of the northeast Atlantic, has found seabirds such as gulls, kittiwakes, skuas and terns were experiencing high levels of breeding failure – a catastrophic event, when almost no chicks are produced by a seabird colony in a single breeding season. These species failed to raise young which feed on small fish in surface waters. This is likely to be due to a combination of overfishing, climate change and pollution.