Your notes and queries answered by Ethna Viney 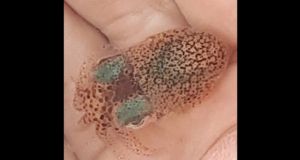 Ethna Viney:
Yes, it is the bobtail squid, Sepiola atlantica, a species closely related to the cuttlefish. It has a light organ in its mantle that can change its colour and outline.

Mark Simpson Donnybrook, Dublin 4:
Could you identify this moth. It was quite large, 35mm wing to wing?

Ethna Viney:
It’s the swallowtail moth, one of the largest.

Jean Byrne, Caherdaniel Co Kerry:
My son noticed this beautiful moth on Murlough beach in Co Down. More red was visible when it spread its wings.

Ethna Viney:
It’s the garden tiger moth. Several photos were sent in; this is by Jean Byrne, Caherdaniel Co Kerry.

Ann Keogh, Oughterard, Co Galway:
These logs on the shoreline in Inishbofin were covered with tunnels, all different sizes, that looked like they were bored by some kind of worm.

Ethna Viney:
The holes were made by ship worms, perhaps Teredo navalis or similar.

Padraic O Malley, Clare Island:
A corncrake sauntered out of a clump of tall grass about 10m from the front door of the post office here.

Ethna Viney:
There were a large number of requests for the identification of clusters of barnacles, attached often to seaweed, washed in on the shore. They were buoy-making barnacles, Lepas fascicularis, the same family as the gooseneck barnacles and not unlike them. The stalk secretes a spongy white float. This photo was sent by Sara Boyce Rosapenna, Co Donegal.