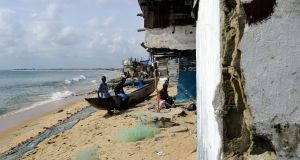 The West Point neighbourhood in the Liberian capital Monrovia, which residents have had to leave because of rising sea levels. Photograph: Zoom Dosso/AFP via Getty Images

Donations by wealthy countries under international commitments to mobilise $100 billion a year to support states most vulnerable to climate disruption “are shockingly low”, according to a report by international aid organisations.

In 2009, developed world countries promised to raise $100 billion a year in climate finance for building community resilience to natural hazards by 2020 but this deadline risks being missed, concludes the report published Concern Worldwide and Mercy Corps on Tuesday.

In addition, what funds that are being delivered, “are instead being directed to tackling climate chaos in less climate-vulnerable countries that are more stable”, the At What Cost? report finds.

Concern Worldwide’s senior resilience policy officer Sally Tyldesley said the global community was not honouring what it said it would do, “and failing to invest appropriately in tackling climate chaos”. The commitments were endorsed in the landmark 2015 Paris Climate Agreement.

“Research from the Red Cross has revealed that, without action, climate-related disasters will lead to 200 million people needing humanitarian aid each year by 2050,” she added. “If we don’t act decisively, climate chaos will have devastating impacts in the world’s most fragile nations, such as more intense and frequent weather-related hazards like floods and droughts.”

This report analyses the financing of two existing measures – climate change adaptation (CCA) and disaster risk reduction – to better manage and reduce risk of climate-related disasters and enable people to cope with multiple shocks and stresses.

With the exception of Micronesia – thousands of small islands in the western Pacific ocean – countries ranked in the 10 most vulnerable to climate change receive chronic underfunding from wealthy nations to enable them adapt to the inevitable impacts of climate and build community resilience to natural hazards. These include Somalia, Niger, Solomon Islands, Chad, Guinea-Bissau, Sudan, Liberia, Mali and Eritrea.

The report calls on donor countries to build climate change resilience into Covid-19 recovery plans, to honour existing commitments and to invest $50 billion in public climate finance by the end of 2020.

It suggested ambitious new targets for the next five years to meet growing needs, including doubling climate finance to the most fragile and climate-vulnerable countries, helping to build resilience to natural hazards for the long-term.

These, it says, should be adopted at COP 26, the annual United Nations “conference of the parties”, where global climate actions are agreed – it is due to be held in Glasgow next year.

The report says there are many reasons why countries most at risk from climate chaos are not prioritised for climate finance. “Bilateral donors in particular have been found to preferentially allocate finances to countries that have a stable and hospitable business environment,” it says.

Donors’ financing strategies have also been shown to be based on political or historical alliances and geography.

Concern Worldwide and the Mercy Corps work in partnership under the Zurich Flood Resilience Alliance, which seeks to support practical ways to help save lives by strengthening community resilience to floods globally. Their report is available at floodresilience.net.