An Taisce says goals including a reduction in car commuting, have not been achieved 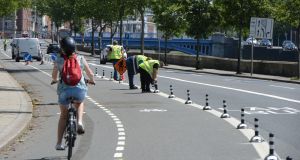 Sustainable transport goals, including a reduction in car commuting, published by the Department of Transport a decade ago, have not been achieved, An Taisce has said.

The national environmental and heritage body has notified the Organisation for Economic Co-operation and Development, (OECD)of Ireland’s failure to meet targets set out in Smarter Travel - A New Transport Policy for Ireland 2009-2020.

The OECD is currently carrying out an evaluation of sustainable transport mobility in Ireland.

In its report to the OECD, An Taisce said a decade of Irish public policy on sustainable transport had been a “failure”.

Specific targets of the smarter travel plan included a drop in car commuting from 65 per cent to 45 per cent and that alternatives such as walking, cycling and public transport would rise to 55 per cent of total commuter journeys to work.

It also stated the total kilometres travelled by the car fleet in 2020 will not increase significantly from 2009 levels and a reduction will be achieved on the 2005 figure for greenhouse gas emissions from the transport sector .

An Taisce has told the OECD that none of these targets has been met.

“This is by any standard represents a major public policy failure which should require investigation and action on causes and responsibility,” An Taisce advocacy officer Ian Lumley said.

“The results of failed transport policy action and investment will now bear long term cost in greenhouse gases, air and noise pollution, congestion, car based sprawl, and inadequate safe walking,cycling and public transport investment. Walkers and cyclists will face increased injury risk, and those who would like to cycle are discouraged by an unsafe polluting car based environment,”he said.

The lessons of what has been “a lost decade in sustainable transport policy and investment” must be addressed in implementing the new programme for Government Mr Lumley said.

The programme for Government does, have objectives to improve sustainable transport he said, including concentrating development in town centres, the development of cycling and walking greenways, and a commitment to a 2.1 ratio of expenditure between new public transport infrastructure and new roads.

“The 2009 sustainable mobility targets were not advanced because an ‘All of Government ’ policy for an entire decade was not put in place. Instead investment was wasted in over scaled road projects such as providing extra lanes on the M7 from Naas to Newbridge and entering into a contract for a dual carriageway from Castlebar to Westport, which will simply increase car traffic and congestion,” Mr Lumley said.

“Achieving measurable annual progress in investment and modal shift to walking and cycling and public transport for all journey types needs to be an overarching strategic priority for the incoming Government with timetabled and target based actions and measuring of results with responsibility taken both politically and by senior public officials and relevant State agencies and boards.”

OECD unclear how ‘rigid’ Leaving Cert prepares students for future 00:00
Irish youth to lead global study into impact of Covid-19 on young people 00:00
‘If you apply for a driving test now, you might get one by June’ 23:57
UK government to announce decision on Finucane murder inquiry 21:05
Sinn Féin TD Brian Stanley apologises for ‘inappropriate’ tweet 20:38