Only one in a 100 million lobsters are white, and female caught in west Cork is in spawn 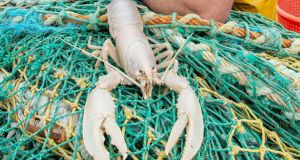 The whole country may have spent the past month basking in sunshine and getting as red as the proverbial lobster but for west Cork fisherman Donagh O’Connor, the warm weather has brought a rather more unusual example of the species: a very rare white lobster.

According to the American Lobster Institute at the University of Maine, only one in a 100 million lobsters are white lobsters so you can imagine Mr O’Connor’s surprise when he lifted his crab pots in Bantry Bay to discover a white female amid the crabs.

“When we learned how rare she was, we decided to give her to Kevin Flannery at the Oceanworld Aquarium in Dingle. Females have a much wider tail than the male, and she has eggs up under so she’s in spawn. Kevin is going to try and get her to lay and hatch out small lobsters.”

Over at Oceanworld, Mr Flannery is eagerly awaiting the new arrival and her possible offspring, as he reveals lobsters can lay up to 5,000 eggs but only 1 per cent will survive in the wild, while lobsters that hatch out in aquariums such as Oceanworld can see up to 60 per cent of their offspring survive.

“We work with the fishermen in a symbiotic way,” said Mr Flannery. “They bring us buried or pregnant female lobsters and we try to get them to hatch out. We feed the baby lobsters with brine shrimp from Utah and keep them until they are ready to fight one another and then we give them back to the fishermen.

“White lobsters are very rare – we have one in Exploris Aquarium in Portaferry in Co Down and we got one a few years ago but there’s no guarantee that a white lobster will produce white lobsters – we could be lucky in breeding more white ones or we may not, but we are going to give a try.

“You do get different-coloured morphs, as they call them. Just last week a fisherman called Frank Scanlan was crab fishing off the Maharees when he caught an orange lobster, which is also very rare and he’s brought him in to us, so we might try and get him to breed too.”

All sex crime suspects should keep anonymity unless they are convicted, report recommends 07:43
Garda taking too long to set up unit to investigate sex crimes, says expert group 07:00
Ex-solicitors charged with fraud over theft of six-figure sum from banks over 18 months 06:06
No time limits and no pre-booking: what the unpublished pub reopening guidelines reveal 05:51
‘Hammer blow’: Pub reopening delay alarms rural TDs 04:00