Plebiscite due on Enniscrone versus Inishcrone conundrum 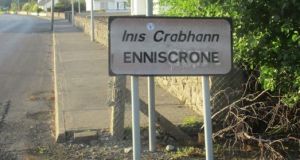 Enniscrone golf club celebrates its 100th birthday this year, but according to locals in the west Sligo seaside resort visitors seeking out the course will be directed to the US if they use Google maps.

A few decades ago road signs for “Inishcrone” started replacing the “Enniscrone” versions, much to the bewilderment of local people. Their bewilderment changed to fury when they realised the impact of modern navigation tools on visitors trying to locate their town.

The controversy over the place name has culminated in a unanimous decision by Sligo County Council to hold a plebiscite on the Enniscrone versus Inishcrone conundrum , with the postal vote expected to be held in September.

Local solicitor Sinead Durkan says they learned from the experience in Dingle where a similar battle was waged some years ago. She expects that if the Enniscrone campaign succeeds other towns and villages will follow suit. “In county Sligo alone several places are affected. Tubbercurry got an ‘o’ instead of a ‘u’, there are now three versions of Ballisodare, and Easkey down the road is also affected.”

However, she says the problem is particularly acute in Enniscrone because of the importance of tourism to the town, and because the first letter has been changed so that Enniscrone is not recognised by Facebook and other online tools.

My father is 93 years old and he cannot understand where the ‘Inishcrone’ has come from. He grew up with ‘Enniscrone’

“It is really confusing for a tourist getting off the plane in Dublin who has been dealing with, for example, a hotel based in ‘Enniscrone’ and who sees a sign for Inishcrone, which means nothing to them.”

Muredach Tuffy, another local campaigner, has unearthed maps and other documents dating back centuries which show different versions of the place name, including “Enniscrone” which was used in a Taylor and Skinner’s map dated 1777.

“My father is 93 years old and he cannot understand where the ‘Inishcrone’ has come from. He grew up with ‘Enniscrone’,” said Mr Tuffy, who has found church and school records from the 1800s all using the Enniscrone version of the name.

One of his most interesting discoveries was the birth cert for W B Yeats’ sister Susan Mary (Lily), dated August 28th, 1866, which shows that she was born in “Enniscrone”.

“The family must have been on holidays at the time because her father John Butler Yeats did two sketches of local scenes, which were sold in London last year and both are signed on the back and say “Enniscrone, Co Sligo 1866”, said the local engineer.

He says that if the community does not reclaim the name “Enniscrone ”then in 50 years’ time “we will have lost a lot of our history and heritage”.

Local publican Anne Gilroy says that every year tourists who drop into her pub complain about problems finding their way to Enniscrone because of confusion over the name. “I believe that when we do have the plebiscite there will be 99 per cent in favour of ‘Enniscrone’.”

Sinead Durkan said it was vital that the turnout among the estimated 1,500-strong electorate is high. “Under the rules we have to have a 70 per cent turnout. After that a 57per cent majority is required, but that won’t be a problem.”

The plebiscite, which has a provisional date of September 20th, will also give locals the opportunity of changing the official Irish name from Inis Crabhann to Inis Eiscir Abhann.

The controversy began when “Inishcrone” was enshrined as the official name of the town in the 1970s by An tOrdú Logainmneacha, who took the lead from names used by the post office network. By the 1990s most of the road signs had been changed, although Ms Durkan said there is one remaining “Enniscrone” sign, the location of which is being kept secret in case it is removed.

“When they changed the road signs it was like someone taking away our history,” she said.

Local county councillor Joe Queenan, who won the unanimous backing of his colleagues for a motion calling for a plebiscite, says the situation is causing “confusion and annoyance” because all local tourist sites and hotels use “Enniscrone” which tourists cannot find on sat-nav , Facebook or Google maps. “When it is your home place and you grew up with the name ‘Enniscrone’ is it very annoying,” he said.

Councillors have been told that the estimated cost of running the plebiscite is €6,000, while it will cost a further €15,000 to €20,000 to change the name on approximately 46 council road signs. After the postal vote it will be up to the Minister for Environment to make the order changing the name.

1 Aaron Brady, the man who said with pride he was a cop killer
2 Aaron Brady found guilty of capital murder of Det Garda Adrian Donohoe
3 Make a Day of It: Get back into your favourite city centre, Dubs urged
4 Case of Covid-19 confirmed at community creche on UCD campus
5 A chronicle of dignity and despair
Real news has value SUBSCRIBE