Excrement and condoms found after illegal rave at Derrynane dunes 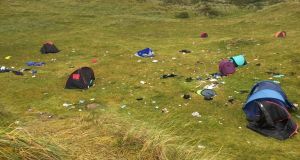 Some of the mess left at Derrynane sand dunes in Co Kerry. Photograph: Facebook

The dunes near the former residence of Daniel O’Connell at Derrynane Beach has been cleaned by locals who have handed over information to the Garda, including the Facebook profiles of the alleged perpetrators.

Local resident Ross Duffy, a project manager with the International Red Cross, described how the “delicate eco-system” in the heart of what is a national park at Derrynane was overrun by teenagers camping illegally.

Condoms, plastic and human faeces among the material that had to be cleaned up by locals over a period of four hours.

Workers at the historic site have said it is a perennial problem each August weekend. Although some of the teenagers left when asked to do so this year, others replaced them.

There is signage throughout the park prohibiting camping and warning that littering is illegal.

About 60 teenagers were involved, locals suspect, and some had arrived having been given lifts in Cork-registered cars as well as on privately hired buses and public transport, the locals say.

Credit card receipts, gym passes, a list of names and other identifying material pointing to areas of Cork city have been handed over to Caherciveen gardaí who are investigating the activity.

Posts on Facebook about the party have also been handed over to gardaí.

Locals such as conservationist Vincent Hyland each year clean up after the rave, but this was the worst year ever.

Mr Duffy, who speaks for the locals involved in the clean-up, said they were completely taken aback. “Not one of those people has contacted us. They seem to experience no shame or guilt. We are agog at the reaction – they are gloating and beaming with pride at the attention.”

The whole weekend had been “hugely co-ordinated”, he said.

He wants a stop put to the destruction of the habitat of the natterjack toad.

Derrynane sand dunes are home to a small population of the endangered toad. The toad is included in the International Union of the Conservation of Nature and Natural Resources Red List for Ireland (2011).