Water tankers have been ferrying supplies to areas worst affected 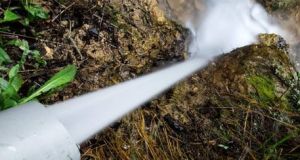 Bursts in three water mains has brought shortages to hundreds of homes in part of Ballina, Co Mayo, and surrounding districts.

Irish Water has described the situation as “extraordinary”.

Local Fianna Fáil councillor Annie May Reape said on Tuesday night that she has been inundated with calls over the last two days from affected families unable to wash clothes or cook because of the unscheduled break in water supplies.

Ms Reape said B&B premises are also badly affected by the water outages “at the worst time possible, the busiest period of the year”.

However, at about 6am on Tuesday there was a third major leak at Bunree Road, causing disruptions to supply over a wide area, both town and country.

Water tankers have been ferrying supplies to the areas worst affected. Customers are reminded to use their own containers when taking water from the tankers and to boil water before consumption as a precautionary measure.

Both Irish Water and Mayo County Council said on Tuesday night it was hoped to have supply restored to all areas by midnight.

Festival and increased seasonal traffic in recent days has added to the complexity of carrying out pipe repairs. Traffic management plans were put in place to minimise disruption to motorists.

Mr Reape said although the numbers of mains bursts in recent days was “unprecedented” locally, the situation was nowhere as bad as in Co Louth last week where a complex repair solution was needed.