Water-quality tests at Kilkee beach due to fears over bacteria 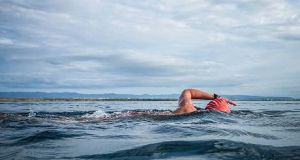 Swimming in the Atlantic. A prohibition on swimming was issued for Kilkee beach last December following an emergency discharge which contained elements of waste water. Photograph: Getty Images

Water-quality tests have been carried out at Kilkee beach in Co Clare due to fears of elevated levels of bacteria following heavy rainfall at the weekend.

Swimming has been prohibited at the popular beach for a second time in a week after an earlier problem with a pumping station, which has since been rectified.

Clare County Council prohibited swimming at the beach on Tuesday on the advice of the Health Service Executive. “Public bathing notices and red flags indicating that swimming is prohibited at Kilkee were originally put in place on Wednesday, July 26th, due to the malfunction of a pumping station which has since been rectified by Irish Water,” the council said in statement.

Staff from the environment section conducted water-quality tests on Monday, the results of which will be known on Wednesday.

“Resumption of swimming will be recommended when results are deemed by the HSE to be within bathing water quality limits,” the council said.

Irish Water said last week that “operational electrical issues” at Kilkee pump station caused pumps to be out of service for a number of hours. This resulted in a discharge of waste water to the nearby Victoria stream.

A prohibition on swimming was issued for Kilkee beach last December following an emergency discharge which contained elements of waste water. This occurred due to a safety device failing combined with heavy rainfall. The prohibition was lifted in May following repair work at the station.