History preserved in the whorls of Irish tree-rings 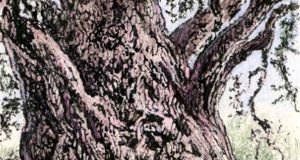 Our young beech tree, clearly drunk on excess CO2, flings its branches ever skyward. But the yew inside the gate pursues its destiny with measured consolidation.

Bought as a prostrate tree in a garden centre pot, it has since built the base of a dark tower, several metres across and head high. At its heart, where blackbirds hide, an inaccessible briar has sprung up to crown the canopy with thorns.

Our yew is thus the very opposite of the form that stands sentry in so many Irish churchyards, its branches clustered into a dark and sombre spire.

This cultivar has been cloned by the million from seedlings brought down from a limestone crag on the Fermanagh side of Cuilcagh Mountain some 250 years ago. The mother tree of Taxus baccata fastigiata still stands in the Florence Court demesne, a rather forlorn old bundle when I sought it out years ago. “No other mutation of tree,” judged Thomas Pakenham, “has achieved this feat of multiplication.”

The occasional grandeur of venerable yews, with their fluted, mahogany glow, has encouraged many myths about their age. The oldest ones are often hollow; their rings of new growth can become paper thin, and the density of their timber adds to the challenge of taking cores to attempt their dating.

Yews can, indeed, live for 1,000 years or more, as the longest-living plant species in these islands. The largest and probably oldest known tree in Ireland is at Ballyrankin, Co Wexford, with a girth of 7.64m, found by the hunter of Ireland’s champion trees, Aubrey Fennell (Perrin TCD thesis 7341).

Wild yews were part of Ireland’s first forests, flourishing, for example, on the limestone pavements of the Burren. On similar, mossy pavement between the lakes in Killarney national park, grows the largest yew wood in these islands, Reenadinna, dated by ancient pollen to some 5,000 years ago.

Most yews of Reenadinna today, however, are still fairly slim and straight at up to 300 years old, and there are no really large and ancient trees to speak for the wood’s continuity. They have, however, had their uses in a very current branch of science: dendrochronology and the history of climate.

Each year’s growth of a tree forms, in effect, a new tree around the old one, so the thickness of the rings of new cells record the tree’s response to temperature, wind and rain during the growing season: the thinner rings, the worse the weather.

A slice of an old tree can look quite beautiful, as in one I once admired in the Navan Fort visitor centre in Co Armagh. It had figured in the remarkable work of Mike Baillie, professor of palaeoecology at Queen’s University Belfast.

Over 40 years of research , Baillie completed a 7,400-year environmental history of Ireland, back to 5,400 BC, as revealed in the tree-rings of native Quercus oaks. Its sequences were pieced together from samples of ancient trees, some salvaged from bogs and medieval buildings.

Baillie became one of the world’s most respected authorities on tree-ring dating and also, in his own term, “a dendro-catastrophist”. He was especially concerned with tree-ring “signatures” in bog oak of stunted growth following two major disastrous environmental events.

His belief that these narrowest tree rings may have coincided with comet activity, rather than volcanic eruptions, led him into controversy. But he also came to accept that such variously gathered samples of Irish oaks were not reliable material for reconstructing precise temperature and rainfall records.

With his colleague, Dr AM Garcia-Suarez, Baillie “gave up any hope of contributing to the issue of climate change using tree rings”, as quoted in the Guardian. Research has since continued, however, with trees such as Irish beech, ash and Scots pine.

Irish yews came into the picture with the PhD thesis of Stephen Galvin at NUI Galway: The Impact of Volcanic Eruptions on the Climate and Ecology of Ireland Since AD 1800 was published online in 2010.

Matching these and other data with tree-ring cores from yews in Reenadinna Wood, Stephen Galvin studied the response, in 32 trees, to aerosol-veils thrown up by well-documented eruptions.

There were severe global impacts from five low-latitude eruptions, such as Tambora in Indonesia in 1815, which brought failed harvests to Ireland and poorer growth in the yews. The much closer eruptions in Iceland, however, rarely inject matter into the stratosphere, and their effects can be masked by major swings of weather in the North Atlantic Oscillation.

Galvin’s work established the long-lived yew as a reliable barometer of environmental change. Even in a warming world, distant eruptions could still leave their fingerprint in the whorls of Irish tree-rings.