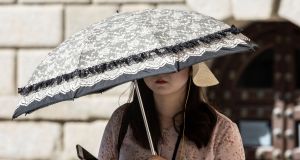 A tourist uses an umbrella to protect herself from sunshine in Toledo, Spain. Photograph: Angeles Visdomine

Extreme heatwaves causing risk to life, such as those under way in Europe, will become more frequent as the effects of climate change gather pace this century, leading climate scientists have said.

Prof John Sweeney, a climatologist and emeritus professor of geography in Maynooth University, said that shifts in mean temperatures will give rise to higher temperatures and more frequent extreme weather events in the near future.

“You get a disproportionate response in terms of extreme high temperatures from a small shift in the mean,” he said, adding that the frequency of events was increasing, a sign that climate change was taking effect. “Heat records are being broken globally five times faster than they were a decade or two ago,” he said.

“If you take the five hottest summers in Europe since the year 1500, they’ve all occurred since the turn of the century. There’s not much doubt the frequency and intensity is increasing.”

The heatwave under way in Europe has led to emergency conditions being declared in many parts of the continent as warm air from north Africa and Spain flows north in what is called the Spanish Plume. A new heat record was recorded in France of 45.9 degrees. There was a red alert for heat in Spain with temperatures over 40 degrees in much of the north of the country and wildfires raged in Catalonia. Fifty-one stations recorded new June temperature records in Germany, including 38.6 degrees in Berlin.

The World Meteorological Organisation said this year was on track to be among the hottest ever and that would make 2015-2019 the world’s hottest five-year period on record. It said the unusually early heatwave in Europe was “just the latest in a series of extreme weather events”.

Prof Sweeney said “the first thing to realise is that the kind of summer we are having in continental Europe at the moment is likely to be the norm by the mid to end of this century. We have to make plans to adapt to those changes.”

Seamus Walsh, head of climatology and observations at Met Éireann, said it would take time to empirically establish whether the heatwave had been caused by climate change. “But, in the past, events like this have been linked and it is consistent with what we expect to happen in a changed climate.”

He said: “We are loading the dice. We are making events like this happen more frequently than they did in the past.

“Something that happens once every 50 years will happen once every 10 years.”