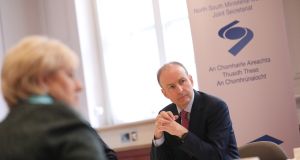 Taoiseach Micheál Martin: ‘I would say to others who oppose it, you simply can’t really be serious about climate change if you’re not prepared to do the hard work that’s associated with that.’ Photograph: Julien Behal

Critics of plans to increase carbon taxes were not prepared to do the “hard work” needed to tackle climate change, Taoiseach Micheál Martin has said.

Mr Martin said Fianna Fáil had supported a carbon tax in Opposition, and was committed to following through in Government, despite the fact the measures were “not popular with everybody”.

“I would say to others who oppose it, you simply can’t really be serious about climate change if you’re not prepared to do the hard work that’s associated with that and that involves a carbon tax that yields revenue that enables us to do big projects like retrofitting, protecting those in fuel poverty,” he said.

Sinn Féin and People Before Profit-Solidarity have opposed the carbon tax, stating less well-off individuals would be hurt most by the annual increases. Some on the left wing of the Green Party, such as former member and election candidate Saoirse McHugh had also opposed the policy.

As a result of the coronavirus pandemic people now had more of a sense “that existential threats are real and we need to deal with them”, Mr Martin said.

“We do need to sort out the most existential threat facing us which is the climate and we just have to take actions in relation to it,” he said.

When it came to policies to tackle climate change Mr Martin said there was “huge opportunity in terms of greenways and walkways”.

The Government was committed to “really significantly increase” the number of greenways and walkways across the country, he said.

“I’ve said to local authorities anywhere I meet them, you know, dust down your plans, any shovel-ready projects there will be funding for them because the quality of life that is improved because of just a simple greenway being provided is enormous,” he said.

The pandemic had also exposed “the duality of the Irish economy”, where people working in low-paid sectors, such as retail, had been crucial during Covid-19, he said.

“I do think we need to look at that and the Government will be looking at the whole area of a living wage, that that’s something we’ve got to, not just a minimum wage but a living wage,” Mr Martin said.

Emerging from Covid-19 there would be a “far greater degree of acknowledgement” of the problem of income inequality, he said.

“Ireland overall is better actually than some of other countries in terms of income equality and there was a recent study which showed that even because of, from 2000 onwards, there was a dramatic impact in reducing income inequality in Ireland which was counterintuitive to what was happening in other parts of the globe, but we have to keep at it,” he said.