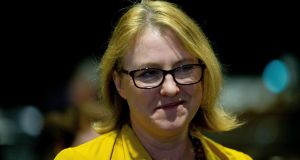 Senator Alice-Mary Higgins: ‘It was clear that the draft Climate Bill did not reflect the ambition or urgency demanded by civil society.’ Photograph: Tom Honan

The Oireachtas Climate Committee has recommended the Climate Bill be significantly strengthened to include a national ban on importing fracked gas, a new 2030 emissions reduction goal, and a mandatory target for reducing methane arising from agriculture.

After eight weeks of intense pre-legislative scrutiny, the Joint Oireachtas Committee on Climate Action (JOCCA) on Friday published its assessment of the Climate Action and Low Carbon Development (Amendment) Bill 2020, including 78 recommendations on how it should be strengthened.

Minister for Environment, Climate and Communications Eamon Ryan has indicated he will consider the report and bring a revised Bill to Cabinet early in the New Year.

The Bill should be drafted in a way that creates clear legal obligations and ensures legal accountability in the future, the committee says, endorsing the approach of the Scottish climate act.

The Bill needs to be accompanied by “appropriate measures for climate resilience”, the report concludes. “It focuses on mitigation [cutting emissions] and should empower and oblige the Climate Change Advisory Council (CCAC) and future governments to plan for adaptation.” This is to prepare for the consequences of climate disruption.

The committee set out its views on just transition, climate justice, biodiversity and nature-based solutions which, it says, “should be included in climate planning and reporting mechanisms as provided for in this Bill”.

“A separate mandatory target for biogenic methane is strongly advised”, as incorporated in New Zealand’s legislation.

“The distinct warming characteristics of biogenic methane make it inappropriate to aggregate all greenhouse gases into a single target,” it says. It cites data showing global methane from agriculture needs to fall by 24 to 47 per cent by 2050 to limit global warming to 1.5 degrees.

The Bill seeks to put in place more effective governance of the State’s climate objectives and to enshrine in law a commitment to achieve net-zero emissions by 2050. It also provides for five-year carbon budgets, changes to the role and composition of the CCAC, and strengthened Oireachtas oversight, while making individual ministers directly accountable for emission targets.

Committee chairman, Green Party TD Brian Leddin, said: “The scale of the challenge is so great that it must be owned by all parties and none. The hallmark of this report is consensus and co-operation.”

Lobby group Climate Case Ireland (CCI) welcomed adoption of its recommendations including a 2030 target, a ban on the construction of liquefied natural gas (LNG) terminals, and “the need to address full lifecycle and non-territorial emissions”.

It also welcomed the recommendation that public bodies be required to carry out their duties in a manner consistent with the temperature limits of the Paris Agreement.

While the report acknowledges the need to address emissions from the aviation and shipping sectors and recommends the Environmental Protection Agency should begin monitoring and reporting on these emissions, CCI said it remains “strongly of the view aviation and shipping should be fully integrated into the Bill and included within Ireland’s targets, plans and carbon budgets”.

CCI campaign co-ordinator Clodagh Daly said the recommendation to “pursue and achieve climate neutrality by 2050 at the latest” was wholly inadequate from a climate justice perspective. This target was “nowhere close to the scale or pace of action required to meaningfully respond to the climate and biodiversity crisis,” she said.

Independent Senator Alice-Mary Higgins, a JOCCA member, said: “From all the testimony we heard, it was clear that the draft Climate Bill did not reflect the ambition or urgency demanded by civil society, scientists or by environmental activists who know we are running out of time. I believe we have produced a strong report with significant recommendations.”

“Our committee has recommended that weak language like ‘pursue climate neutrality’ by 2050 be replaced by stronger commitments to ‘achieve climate neutrality’, a focus on 2050 is not enough when it is what we do in the next 10 years that will matter most.”

She added: “This is the UN decade of action, just 10 years to deliver on the Paris Agreement and achieve the sustainable development goals and we have recommended stronger commitments to both these treaties in the Bill.”