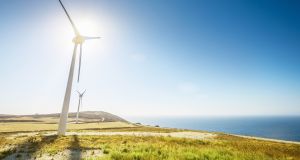 Sinn Féin’s Darren O’Rourke expressed concern that in relation to offshore wind energy the State ‘does not directly own or operate any such resources’. File photograph: Getty Images

The State is getting the modern-day equivalent of religious “indulgences” by paying €50 million to Estonia and Denmark for “statistical transfers” to make up for failing to meet renewable energy targets this year, the Dáil has been told.

Sinn Féin TD and party environment spokesman Darren O’Rourke said that “for €50 million, we get a piece of paper and absolution”.

Under the 2009 EU renewable energy directive, the State aimed for 16 per cent of energy demand to come from renewable resources by 2020, but Minister of State Hildegarde Naughton said the Sustainable Energy Authority of Ireland has indicated a likely shortfall of between 3 per cent and 4 per cent in this regard.

To ensure “compliance” with the directive, the Department of the Environment and Climate has an agreement with Estonia and Denmark, who have more than met their targets, to pay €37.5 million to Estonia for the purchase of 2.5 TW hours (the equivalent of 2.5 trillion watts for one hour) of energy and €12.5 million to Denmark for 1 TW hour of energy in so-called statistical transfers of renewable energy from one member state to another.

Ms Naughton acknowledged this was not the way the Government wanted to meet its targets, but pointed out that “Luxembourg, Malta and the Netherlands have all concluded similar arrangements in recent years”.

He said there was “massive offshore wind potential. It is imperative that it is not privatised – that it is not a case of moving from big oil to big wind or paying our way out of this crisis.”

Labour climate action spokesman Duncan Smith said the State may not be alone in being a laggard in meeting its climate targets but “we are in a sorry minority”.

He called on the Government to state how much renewable energy coming on stream “will be siphoned off for other multinational corporations such as those running data centres”. Mr Smith said those multinationals are entering prepaid contracts with companies that own wind farms “to siphon off up to 15 per cent, 20 per cent or 25 per cent of the energy created in order to power data centres”.

He added that the data centres “are huge carbon emitters and very poor in terms of creating jobs.

“There is a structure here that will only get bigger and will be bad for the worker, the economy and the Irish taxpayer because we will continue to pay these exorbitant penalties to countries that are doing things far better than us.”

Social Democrats TD Jennifer Whitmore described the agreement with Denmark and Estonia as a “paper exercise – a sleight of hand that essentially is just us pretending we have met the targets”.

Independent TD Seán Canney said the issue was much deeper than cost alone.

Mr Canney said the State needs to have a shareholding in the private enterprises carrying out the work to harness wind energy.

“We need to make sure there is a dividend for the State.”