Cervical screening to resume next month, following by breast and bowel cancer services 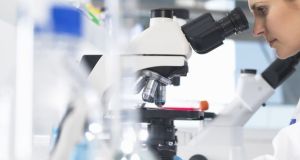 There have been six more Covid-19 deaths in the Republic and five new cases.

The number of fatalities reported in recent days has remained relatively low - from zero on Sunday for just the third occasion since March, to two on Monday and three on Tuesday.

Commenting on the latest data, Dr Tony Holohan, Chief Medical Officer at the Department of Health, said the State has moved in the right direction in combatting the spread of the disease.

As of midnight on June 21st, 92 per cent of all confirmed cases are believed to have recovered, he said.

“As we go forward, the behaviour and progression of this disease is in all of our hands. Every single one of us today has the ability to reduce the impact the virus might have on our most vulnerable and those at risk,” said Dr Holohan.

“You can do this by keeping a physical distance from others or wearing a face covering when in busy public places like shops and public transport, and by continuing to keep your number of daily contacts as low as possible.”

Earlier, the Health Service Executive said it expects the backlog of cervical cancer screening tests built up during the Covid-19 pandemic to be cleared by October after screening resumes next month.

The HSE set out plans to reopen medical services unrelated to the coronavirus disease at a media briefing with the first of the three main cancer screening services to restart on July 13th.

“We expect to clear all those who were suspended some time in October,” he said.

Screening services including BreastCheck, CervicalCheck as well as those for diabetic retina and bowel cancer were suspended on March 27th due to risk of contracting Covid-19.

Dr Henry said that he expected diabetic retinopathy screening to be “easier” to resume and that he hoped that this would restart next month.

Breast and bowel cancer screening were “slightly more complicated” as they involved “congregated settings” and they would not return until September.

Mobile screening units are being “refashioned” to protect healthy people in breast cancer screening and the vehicles used to carry out testing would have to be “repurposed” for safety.

Dr Henry hoped that invitations for resumed bowel screening will start in September.

The resumption dates were based on there continuing to be “safe, low levels” of community transmission of the virus and public restrictions not having to be reimposed, said Dr Henry.

“Whatever services we reopen, clinically at all times we have to be mindful of Covid disease patterns in society and any public health responses that are necessary to ensure that transmissions remain low,” he told reporters at the weekly HSE media briefing on Covid-19.

HSE chief executive Paul Reid asked the public “to bear with us” as the health service was planning for a “winter that we have never had before” as it deals with Covid-19, the traditional flu season and the resumption of regular medical treatments and screening programmes.

He said that he was hopeful that the HSE could conclude some successful agreement with the private hospital groups that will give the health service “some capacity to deal with a surge.”

The HSE’s framework document on continuing care during Covid-19 says that maintaining an 80 per cent occupancy requirement in acute hospital capacity to deal with a surge in the virus requires a reduction of up to 108,000 cases “which exceeds all of the elective capacity.”

The document estimates that the potential impact of the two-metre physical distancing rule could result in a reduction of about 25 per cent in acute inpatient beds.

Mr Reid said the HSE had been clear for some time on the “significant” effect on the health system from the social distancing guidelines to protect against the spread of the virus.

The health service had to approach the resumption of health services in an “extremely cautious manner” because of the risk of the virus spreading into healthcare settings, he said.

The HSE was entering its winter planning phase “with an unprecedented and a heightened level of uncertainty and unpredictability,” he said.

The health service had to plan to maintain capacity for a possible second surge of the virus.

“Nobody knows and can predict the impacts of this across Europe in terms of second waves,” he said.

Asked about a 20 per cent increase in the number of Covid-19 outbreaks in private households over a two-day period last weekend, rising from 325 on Friday to 390 on Sunday, Dr Henry said that this was “a worry” but “not a surprise” as close contacts are increasing with the easing of public restrictions.

He warned that releasing social restrictions does not mean that people were being released from their obligations and advice on social distancing and avoiding congregated settings.

HSE chief operations officer Anne O’Connor said that 85,000 people were treated “virtually” in May during the Covid-19 pandemic, up from 34,000 in March.

Ms O’Connor said that the health service was seeing “a significant and marked increase in the use of virtual health” during the pandemic.

The HSE “cannot go back” to large numbers of people waiting in waiting rooms while they are awaiting outpatient appointments in acute hospitals, he said.

Dr Siobhan Kennelly, the HSE’s national clinical lead for older persons, said the pandemic had highlighted the risk of congregated healthcare to older people and the future need for them “remaining in their own for as long as possible.”

She said a prolonged pandemic could bring into question the whole model of long-term residential care for older people who are most at risk from the disease.

“If Covid was to stay here for another two to three years, we would be extremely challenged to continue to manage long-term residential care with our current model, particularly big nursing homes and big congregated settings,” she said.