Plans by hotelier Martin Keane for the site are declared invalid 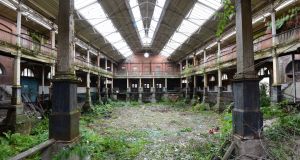 The inside of the Iveagh Markets on Francis Street, Dublin. Photograph: Dara Mac Dónaill

An application from Temple Bar hotelier Martin Keane to redevelop the historic Iveagh Markets in Dublin’s Liberties has been declared invalid by Dublin City Council.

Two days before Christmas Mr Keane lodged an application to turn the Edwardian building on Francis Street into a European-style food hall, restaurants, a distillery, a brewery and crafts workshops. However, the council plans to repossess the market which Mr Keane has had in his control for over 20 years.

In a report to councillors this month the council’s head of planning Richard Shakespeare said the council was not satisfied Mr Keane had “secured the appropriate funding” for the project, and his application had been lodged “without the council’s consent as landowner”.

Mr Keane “claims to hold the freehold interest in the property which is untrue in relation to the Iveagh Markets element of the application”, Mr Shakespeare said.

The council has advised Mr Keane it is “terminating all communication with him, and that it is taking the necessary steps to repossess the property from him”. The council “will defend this action in the courts if necessary”, said Mr Shakespeare.

The council’s planning department has now declared the application invalid on the grounds that no “letter of consent from the site’s owners” had been submitted with the application.

The market was built early in the last century by the Guinness family to house street traders who had been displaced by the construction of the nearby Iveagh Trust housing development on Patrick Street, and was handed over in trust to Dublin Corporation.

By the 1980s the building had become very run down, and it eventually closed in the 1990s. In 1996, the council announced it was seeking a private developer to regenerate the market. The following year Mr Keane secured the tender, with an agreement that the title of the market would transfer to him once the redevelopment was completed.

However, the development became mired in an ownership row between the corporation and the Guinness family-controlled Iveagh Trust. The dispute was not resolved until 2004. Mr Keane applied for planning permission, which was granted by An Bord Pleanála in 2007, but before he could act on it the recession hit.

In 2012, he secured a five-year extension of planning permission, which expired in 2017. That year the council voted to take back control of the market from Mr Keane.

The council subsequently commissioned a report on the condition of the building from conservation architects Howley Hayes, which found that “essential structural repairs” alone would cost €13 million.

Mr Shakespeare last year told councillors the council did not have the money and the “most efficient way” forward for the market would be for Mr Keane to redevelop it.

Mr Keane said that, under legal advice, he will not be making any comment on the matter.