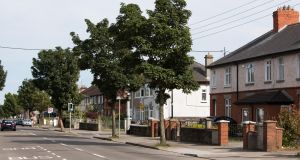 One councillor said it was ‘just not realistic’ to “bring in a blanket ban” on speeds above 30km/h on key routes such as Collins Avenue. Photograph: Tom Honan

Dublin City Council’s planned “blanket reduction” in the city’s speed limit to 30km/h has been amended to allow 40km/h speeds on certain routes.

The amendment which provides for council area committees to consider the appropriate speed limits on arterial roads, was approved by councillors on Monday night. It will involve a new round of public consultation delaying the introduction of reduced limits on key arterial routes until next year at the earliest.

The move is a blow to Dublin City management’s plans to introduce a default speed limit of 30km/h across the city.

Earlier this year, Dublin City Council said it was planning to introduce a 30km/h limit in all residential areas by September. However, following the outbreak of coronavirus it was decided to extend the limit to almost all major approach roads to the city to “protect the larger numbers of pedestrians, cyclists and vulnerable road users” accessing the city.

But at Monday night’s council meeting Cllr Naoise Ó Muirí (Fine Gael) said it was “just not realistic” to “bring in a blanket ban” on speeds above 30km/h on key routes such as Collins Avenue, Griffith Avenue and the Malahide Road.

He said he did not condone speeding, but on some roads outside the city’s canals a 30km/h limit was neither realistic nor practical.

He proposed an amendment that would see the issue of the section of local speed limits on arterial roads be decided by the council’s relevant area committees.

Mr Ó Muirí was supported by Cllr Mary Freehill (Labour) who said public transport would also be affected by a 30km/h limit and she said commuters could not be expected to tolerate that. She said she was supportive of getting more cars off the roads but “what we are looking at here is too much”. She said arterial roads through Harold’s Cross, Rathgar Road and Crumlin Road should not be subject to a 30km/h limit.

However, Green councillor Donna Cooney said: “I know these roads which are some of the most dangerous and I would not be in support of this amendment.” She said Dublin buses “rarely” get up to the speed limit at commuting times.

Cllr Ó Muirí’s amendment was carried by 32 votes to 18.

In June, the council said its proposal to reduce the speed limit was “in line with other European cities” which had taken similar measures “in order to protect the larger numbers of pedestrians, cyclists and vulnerable road users moving around in these areas and on the road carriageway due to Covid-19 travel restrictions and social distancing requirements”.

While the council had described these measures as temporary, the 30km/h restrictions were being proposed under bylaws, which would mean they would remain in place permanently, unless new bylaws were introduced to rescind them.