Dublin dog pound under review by council amid Garda investigation 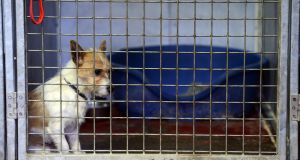 A review into the operations of a Dublin dog pound has been initiated by Dublin City Council following concerns over animal welfare at the facility.

Gardaí are investigating allegations in relation to the improper use of veterinary drugs, used to euthanise animals, at Ashton Dog Pound in Ashtown, west Dublin.

The pound operates dog warden services under contract for the city council, as well as for Dún Laoghaire-Rathdown and Fingal county councils.

The letter, written by councillor Donna Cooney and signed by all 10 Green Party councillors for the region, noted that “An Garda Síochána are currently investigating the use of a drug by unqualified staff that should only be administered by a veterinarian”.

Ms Cooney said any service provider contracted by the council should have “dogs’ welfare as central and should be seeking firstly to reunite lost dogs with their human, or rehabilitating and seeking to rehome dogs and that dogs should not be routinely killed”.

Fianna Fáil Dún Laoghaire-Rathdown councillor Shay Brennan said he was also “very concerned” about the alleged treatment of animals in the pound in light of the current Garda investigation.

He has submitted a motion to next month’s council meeting instructing the chief executive to “fully review the contract between Dún Laoghaire-Rathdown County Council and the Ashton pound, and to terminate this contract if the dogs are found to be receiving anything short of the most compassionate of care”.

A spokeswoman for Dublin City Council on Monday said it was “carrying out a review of the operations of the Ashton pound and will not be commenting further at this time”.

The Ashton Dog Pound said it could not comment on an ongoing Garda investigation.

Dún Laoghaire-Rathdown County Council said it was carrying out a review of the operations of the Ashton pound and would not be commenting further while there was an ongoing Garda investigation.

Fingal County Council also said that as the city council was undertaking a review of the pound, it would not comment at this time.

Gardaí on Saturday transferred 32 dogs to the Ashton pound, after the dogs had been seized from a property in north Co Dublin. The dogs, who were believed to have been stolen, and have been valued at more than €120,000, were seized in searches at Stockhole, Cloghran, in Swords.

The pound said on Monday it was in the process of scanning the dogs for microchip information, before making attempts to reunite the dogs with their owners.