Temple Bar artists’ studio may be replaced with restaurant

'The Icon Walk' in Dublin's Temple Bar is jeporady as the founders near-by studio and gallery 'The Icon Factory' is set to close after ten years. Video: Enda O'Dowd 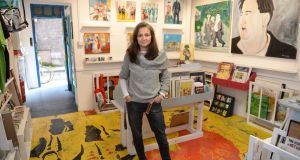 A campaign is mounting against plans to turn one of the last remaining artists’ facilities in Dublin’s Temple Bar into a restaurant.

The Icon Factory at Aston Place has operated as a not-for-profit artists’ co-operative and gallery for 10 years, providing studio space to new and emerging artists. The gallery also established the Icon Walk, a public art installation by local artists in the streets around Temple Bar.

However, following a recent change of ownership of the building, the artists have been told they must vacate the premises next month.

An application has been made to Dublin City Council by Yong Feng Gao to convert the building and two adjoining premises stretching to Aston Quay into a restaurant. The council has yet to make a decision on the application, but the owners are seeking vacant possession of the Icon Factory, artist Aga Szot said.

“When we opened the gallery 10 years ago the building had been an abandoned post office, and the streets around it were unused and derelict. We established a charity dedicated to promoting local artists, most of which would never have had an exhibition before, and the Icon Walk has brought life and has civilised unused back streets.”

The walk, which features images of Irish musicians, sporting heroes and writers was in 2012 endorsed by the Unesco City of Literature office as an important site for the celebration of Irish literary talent and culture.

“We want to share our concern about what is happening to Temple Bar, about the removal of artists from the city centre. No one is coming to Temple Bar now, because it was only a machine run for tourists. Art will bring people back into the city,” Szot said.

Emma Doyle, an artist who has exhibited at the factory, said volunteers had “worked tirelessly to turn an undesirable area of Temple Bar into a successful cultural enterprise”.

Temple Bar was “already swamped with restaurants and very little culture in an area that is supposedly Dublin’s Cultural Quarter”, she said.

Labour city councillor Dermot Lacey said the loss of the facility would be a “huge pity for Dublin and for the artists involved”. He is asking council management to work with the centre to secure their permanent presence in the area “as one of the few unique and artist-led projects remaining in what was intended to be a major cultural area”.

Research by urban planner Oliver Reid on the retail history of Temple Bar found the number of restaurants, cafes and takeaways had increased from 11 in 1984 to 85 in 2019.

“In contrast, the number of units in the area that could be considered artistic/cultural facilities has fallen in recent years from 16 in 2006 to 11 in 2019,” he said.

“The provision of yet another restaurant at the direct expense of an artistic/cultural facility in an area of the city the current development plan acknowledges as its key cultural/creative quarter would, in my opinion, contravene the aims and objectives for the wider Temple Bar area,” he put in a submission to the council on the restaurant proposal.

Several local residents have also objected to the loss of the gallery.

Declan O’Brien said the gallery was “the epitome of a cultural hub” and the Icon Walk had “seen the artists transform the dilapidated lanes” in the area. “These streets were once no-go areas. Now they attract walking tours and visitors and have given the area a character and unique Irish identity,” he said.

“There is already an abundance of restaurants in the area. But sadly cultural facilities such as the Icon Factory are very rare indeed.”

In an objection to the restaurant application, he said Szot had transformed “neglected and abused back lanes” that had previously been “havens for crack and heroin junkies, graffiti vandalism and bulky rubbish bins for the hotels that back on to them”.