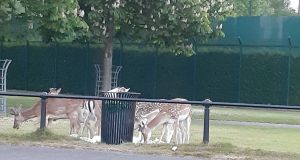 Picnickers enjoying sunny weather during the lockdown are being blamed for a more than 50 per cent spike in the amount of rubbish dumped in Dublin’s Phoenix Park.

Officials have warned the increased waste could be deadly for the park’s 620-strong herd of wild fallow deer if they ingest plastic-wrapped food overflowing from bins.

Latest Office of Public Works (OPW) figures show 65 tonnes of litter was collected in the park between April 1st and July 31st this year.

The amount was up 51 per cent on the 43 tonnes gathered by park litter teams during the same period in 2019.

Paul McDonnell, the park’s superintendent, said he was expecting some increase, given the numbers flocking to the 1,752-acre grounds during the strict coronavirus restrictions in early summer, but he was taken aback by the scale.

“Phoenix Park was probably busier than it has ever been, so we were expecting a rise in the amount of litter we were collecting, but it caught me a bit by surprise that the increase was that much,” he said.

Bottles, sandwiches, coffee cups and cans made up the bulk of the litter. “No different from normal litter and rubbish that would be discarded in our bins, but it was just the volume of it,” Mr McDonnell said. Disposable face masks also featured.

Extra staff were drafted in, particularly at weekends, to help park officials cope with the increased cleaning workload. A number of extra temporary bins were also placed around the open space.

Mr McDonnell said a particular worry about the overflow of waste was its potentially lethal impact on deer.

“The deer are inquisitive, and they will eat an empty packet of Tayto, or sandwich wrapping or something like that, and it can get stuck in their stomach.” Such rubbish could kill a deer, he added.

“It has been known to happen. It is absolutely a huge threat to them.

“It gets stuck in their stomach and causes a blockage. Deer are grazers, they are ruminants, so they can only digest grass and green-based plants.”

Staff have captured some images of deer nosing through waste.

“It is a brilliant thing that people are using parks, it is good for their health and wellbeing, but if you come across bins that are full, bring home your waste with you, don’t leave it there.”

The OPW has contracted a waste provider to remove collected waste from around the Phoenix Park. About 89 per cent is recycled with the remaining 11 per cent going to landfill.

An OPW spokeswoman said there had been a large increase in numbers visiting its historic properties and landscapes over recent months “which unfortunately has coincided with an increase in the incidences of littering”.

“In order for all visitors to enjoy their visits, we would ask the public and citizens to work with us, to respect our landscapes, habitats and biodiversity and to use bins only where provided but otherwise to leave no trace and bring their rubbish home with them,” she said.