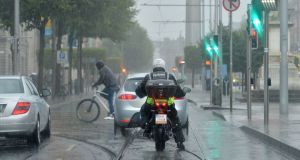 Dublin’s traditional Halloween events are to be severely curtailed due to concerns over an inability to enforce coronavirus public health guidelines. Photograph: Alan Betson

Dublin’s Halloween “Spooktacular” events are set to be cancelled or significantly curtailed due to concerns over an inability to enforce coronavirus public health guidelines.

While Halloween is still two months away, Dublin City Council has already decided traditional organised gatherings will not be feasible and will have to be replaced by “environmental initiatives”, community engagement projects, and “virtual” festivals.

However, the council management and councillors have acknowledged that illegal bonfires are likely to return without organised festivities.

The council has for several years organised parades, funfairs, and fireworks displays in the city and suburbs such as Ballymun, Finglas, the Docklands and Ballyfermot, which have been successful in reducing the number of illegal bonfires held.

Assistant chief executive Brendan Kenny said it was difficult to see how these large organised events could be held this year under Covid-19 public health guidelines.

“These events were hugely successful in weaning people away from bonfires, but unless there is a major improvement with Covid-19, it doesn’t look like we can go ahead with these events, particularly if the two metre rule is still in place.”

However, Mr Kenny conceded it was likely there would be a return of illegal bonfires if these events are cancelled.

“It’s like the pubs being closed and people having house parties. The reality is there will be disorganised events and they will be worse. At the same time it would be really difficult to for the city council to have an organised event, and if something were to happen as a result, to have to take responsibility for that.”

Mr Kenny said the council would be working to develop some activities which would not involve crowds gathering.

“Last year was the quietest Halloween in Ballymun I can remember. The festival has have a huge impact and there has been a steady decrease in bonfires,” she said.

“There will be that knock-on effect of the return of bonfires, but there were about 5,000 people at the festival in Ballymun last years and I just don’t see how it could safely go ahead this year. I think taking the decision to cancel these events now is the right thing to do.”

“It is really disappointing that it is likely to be cancelled. The fireworks in particularly were really popular and really well organised. Having said that, the most important thing at the moment is that we get over this virus. This decision wouldn’t be taken lightly.”

However, Sinn Féin councillor Daithí Doolan, who represents Ballyfermot and Drimnagh said he was opposed to cancelling Halloween festivals.

“If you cancel what is a positive diversionary activity you create a vacuum that will be filled with negative dangerous activities that will put lives at risk.”

While it might be difficult, it should be possible to organise an “enjoyable and safe” festival, depending on the health restrictions at the time, he said. He was also concerned that Covid-19 was being used as a “smokescreen” to avoid spending money on community events.