Dublin ‘can learn from Vienna’, where public transport cost only €365 a year 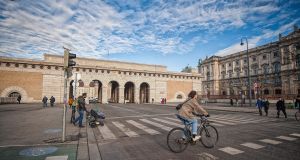 A street with a pedestrian crossing near Vienna Hofburg Imperial Palace. Photograph: iStock

Allowing unlimited public transport at a cost of €365 per person per year is one of the big contributory factors in Vienna regularly being ranked as the most liveable city in the world, according to its deputy mayor Maria Vassilakou.

Having a lot of open space was also key to that success, she told an EPA conference in Dublin on climate change.

Effective management of that space helped make a city that people want to live in, rather than work in. “A lot of open space has everything to do with traffic and mobility,” she added, noting that many people in major European cities spend the equivalent of “a second holiday” in traffic.

The city had a deliberate policy of using space to grow trees, which was competing with carparking slots; so much so the issue for some became one of how much parking spaces would be lost rather than the financial cost.

Vienna was fortunate in having invested early in a metro and tramways, Ms Vassilakou said. The nearest station was 300 to 500 metres away, with a waiting period of three to five minutes though many of its citizens “still love the car”.

The public transport subsidy “worked brilliantly” with 800,000 people out of a population of less than 2 million having the equivalent of a Leap card – as a consequence public transport was quicker and cheaper than the car, and parking spaces were moved to suburbs.

More than 200,000 people were cycling on a daily basis availing of 1,400 km of cycle lanes though there was still controversy over introducing cycle lanes. Meanwhile, 56 per cent of commuting trips involved some element of walking. A priority was the creation of “great public places where people slow down” or relax.

New urban quarters had to benefit the whole city, have vast accessible green spaces – “not for gated communities” – with high level public transport and a focus on cycling and walking, while collective carparking is at the edges.

Prof Brian Caulfield of Trinity College said Vienna was “a city we can learn a lot from”. How space was used was critical but “Dublin has very little space to do what we want to do”. He challenged the view that the cheapest transport solutions had to be found in adopting “non-car modes of transport”; a broader national conversation was needed on the best options.

Prof Chuck Sabel of Columbia Law School in the US said there had been very promising developments in Irish agriculture, notably in dairying and in ensuring water quality by managing catchments in response to pollutants arising from farming. He was optimistic for the sector, though not all problems were solved. A methane emissions issued still had to be addressed.

There would be increased global demand for beef and dairy products but “it would be crazy to limit the ability of the most efficient producers so production can go to a dirtier locale”, he said.

Ireland could be “energy independent” by 2050, said Marie Donnelly, former director of renewable, research & innovation and energy efficiency at DG Energy in the European Commission.

“We have the natural resources to be energy independent. With Scotland, we have the highest levels of wind in Europe and we could introduce solar and let people sell electricity into the grid now. The technology costs are reducing and once you install photovoltaic, wind and batteries, the fuel is free.” she said.

She noted that in the Netherlands, new houses cannot be connected to the gas grid, yet in Ireland some new schools were installing fossil fuel systems. “We as parents and grandparents have to say no to that happening,” she added.

Margaret Desmond, manager at the EPA Climate Services Unit, said Ireland was in the final phase of the transition to decarbonisation, where the most challenging task “is to bring all of society with us”.

“Tackling single-use plastics is tinkering at the edges of the issue. We need to ratchet up our actions and have some hard conversations. There is emphasis on the transition in energy, agriculture and transport. We have to create awareness, motivate and empower people to change or the transition will be lost.”