Ireland's politicians are fooling nobody with their ‘climate emergency’

Relentless pursuit of economic growth twinned with the impact of climate change has put an "unprecedented" one million species at risk of extinction according to a landmark report. Video: Reuters 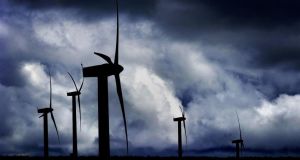 TDs of all stripes have supported objections to wind turbines in various parts of the country while backing the continued destruction of our bogs. Photograph: Ben Curtis/PA

The unanimous decision of the Dáil to make Ireland the second country in the world to declare a climate change and biodiversity emergency was pure guff and a reflection of all that is wrong with Irish politics. With a pathetic record of foot-dragging on the country’s commitments to reduce carbon emissions and a poor history of protecting biodiversity, our politicians are fooling nobody with their declaration of a climate emergency.

This attempt to portray themselves as being on the side of the angels while their actions have done nothing to justify it will simply add to the corrosive cynicism about politics which is fuelling anti-democratic forces across Europe.

Even the way they went about the declaration of a climate emergency showed the hollowness of what was simply a public relations gambit. Just six TDs were in the Dáil chamber last week when the decision, supported by Government and Opposition, was taken without a vote.

It arose when a Fianna Fáil amendment to the Oireachtas report on climate action was accepted by both the Government and Opposition. The amendment was moved by the party’s environment spokesman Timmy Dooley but he was not in the Dáil when the vote was called and neither was any other member of his party.

During the debate Brian Stanley of Sinn Féin had also called for the declaration of a climate emergency but none of the party’s TDs was in the Dáil chamber either when the amendments were put. It was left to Green Party leader Eamon Ryan to propose the motion observing: “We have declared a climate emergency in our own Irish way.”

The trouble is the Irish way has not worked up to now and is unlikely to work in the future unless there is a complete change of attitude by everybody in Leinster House. The chair of the Oireachtas Climate Action Committee, Fine Gael’s Hildegarde Naughton, welcomed the outcome as an important statement but at least she had to wit to add: “Now we need action.”

She said Minister for Climate Action Richard Bruton would speedily return to the Dáil with new proposals but it is going to take a complete change of attitude by all of our TDs if there is to be the slightest chance that Ireland will be able to live up to its obligations in the years ahead.

Bruton confirmed yesterday that the State is likely to face a bill of up to €150 million to pay for carbon credits to compensate for the fact that Ireland will fail to meet its greenhouse gas emissions targets next year. He told a conference on climate action that Ireland is likely to have to purchase carbon credits in the marketplace for 16 million tonnes of carbon emissions.

The Government has to accept primary responsibility for the fact we are now in this position after lagging away behind our targets for reducing carbon emissions over the past decade. The most obvious example of the lack of seriousness with which it has approached the issue is the fact that the peat-powered electricity generating plant in Edenderry, Co Offaly, is still in operation with no sign of a plan to take it out of action. As well as pumping carbon into the air the plant is also helping to undermine biodiversity by destroying part of our remaining bogland.

The chair of the Government’s Climate Change Advisory Council, John FitzGerald, has suggested it would be cheaper to close the plant and continue to pay all the workers their full salaries while a process of redeployment was carried out, rather than continue the emissions that will inevitably result in serious European Union fines down the line.

The continued use of coal from an open-cast mine in Colombia to fuel electricity generation at the at the Moneypoint power plant in Co Clare is another obvious blight on the country’s environmental record from every perspective.

While the Government has so far failed to take the issue seriously enough the Opposition has not been much better. The refusal of Sinn Féin and the hard left to agree to increased carbon taxes is pure political opportunism as a substantial increase in carbon tax is just one of the measures that will be required to meet our targets. To compound the problem, TDs of all stripes have supported objections to wind turbines in various parts of the country while backing the continued destruction of our bogs.

There are clearly no simple solutions to all this. It is easy for middle-class Green activists to propose the end of farming as we know it or campaign against economic growth when the devastating consequences of both would be felt by others.

A sensible approach involving discussion at community level to develop a consensus from the ground up was suggested in this paper on Tuesday by Shana Cohen, a director of the Tasc think-tank. Radical change in behaviour will be required but the public will have to be included in the decision-making process if it is to work. The success of plastic bag tax and the smoking ban show that we can change behaviour when the mood is right but time is running out for serious action on climate change.

1 Coronavirus: One more death in Republic as expert warns house parties are ‘disaster’ for containment
2 ‘Frustrated and angry’: Thousands march in Dublin to protest death of George Floyd
3 Róisín Ingle: Even Matt Damon has fecked off back home
4 Populist politics in all but name is alive and well in Ireland
5 Diver (35) suffers spinal injuries after hitting rocks in Co Cork
Real news has value SUBSCRIBE