Dublin Zoo have announced that the sex of the baby gorilla born there recently is female. They have also launched a competition to find a name for the new arrival. Video: Dublin Zoo 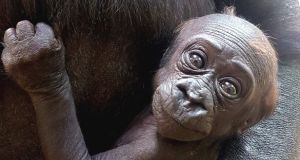 It’s a girl! The sex of the baby gorilla born recently at Dublin zoo was revealed on Wednesday.

A competition is now under way to find a name for the animal.

The gorilla which was born on April 1st weighing 2-2.5kg, is the first offspring of Dublin zoo gorilla’s Bangui and Kafi .

“We’re delighted to be able to share this news with our fans and really look forward to their help in picking a name for the latest addition to our gorilla troop. Since her birth, a little over 6 weeks ago, the baby gorilla has been hugely popular amongst visitors to the Zoo and we’ve been very pleased with how she’s settled in,” Helen Clarke-Bennett, Team Leader of the African Plains at Dublin Zoo said.

The naming competition is sponsored by energy company SSE and those wishing to enter can do so by visiting www.sseairtricity.com/dublinzoo. They are being asked to suggest a name that reflects her West African origin. The closing date is Sunday, May 26th and the new name will be announced in early June.

Western lowland gorillas are classified as critically endangered by the International Union for Conservation of Nature and Natural Resources (IUCN) Red List of Threatened Species. The numbers of these primates living in the wild is expected to fall by over 80 per cent between 1980 and 2046 with deforestation, commercial hunting and a highly contagious virus called Ebola being the three main threats facing their survival.