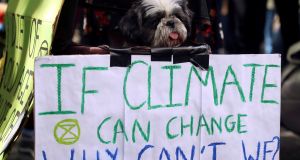 Ireland will have to be turned ‘entirely on its head’ over the next decade to tackle climate change, the secretary general at the Department for Communications, Climate Action, and the Environment has said. Photograph: Simon Dawson/Reuters.

Ireland will have to be turned “entirely on its head” over the next decade to tackle climate change, the secretary general at the Department for Communications, Climate Action, and the Environment has said.

Mark Griffin said the department hopes the Government will approve an action plan in the coming weeks which will demonstrate a “step-change” in what the State intends to do to halt global warming over the next few years.

“The reality is as a country, we will have to change how we work, how we travel, how we socialise, how we heat our homes, how we carry out economic activities,” Mr Griffin said.

“So in other words, turn the country entirely on its head over the next 10 years and that’s no mean challenge but it has to be done. Of course as well as being a challenge there are huge economic opportunities for the State if we do this.”

Mr Griffin said Minister Richard Bruton hopes to publish the plan “shortly”, which will build on steps already laid out in the National Development Plan.

He noted that Ireland became the second country in the world to declare a climate and biodiversity emergency last week after an amendment to the Oireachtas report on climate change was accepted in the Dáil.

“For me that sends a very strong political statement of intent by all the political parties in the Houses of the Oireachtas about the need to come to terms and really take ownership for this important area and to up our level of ambition as a country very, very significantly over the next 10 years,” he said.

Mr Griffin also said the electricity sector in Ireland is undergoing “unprecedented change” and that the climate action plan provides for a “very substantial ramp-up of activity and innovation and change” in the sector.

“We’ve already stated publicly that we would achieve 70 per cent renewable activity on the grid by 2030. This is a major policy, regulatory and technical undertaking and will involve major development of offshore renewable energy, mainly offshore wind, the development of grid scale, solar energy and an increase in onshore wind capacity,” he added.

“The knock-on consequences of that is that we need to have increased levels of storage and interconnection on our system, we need to develop the offshore grid and we need a new planning and consenting regime and grid connection framework.”

Mr Griffin was speaking at the launch of the first ever joint Nordic-Irish partnership between the Nordic embassies in Dublin and the All Ireland Smart Cities forum.

The partnership will see representatives from Norway, Finland, Denmark and Sweden form a new alliance that builds on an existing €6billion Irish-Nordic trading relationship for goods. It also aims to help Nordic and Irish companies collaborate on sustainable solutions to address major challenges facing towns and cities.