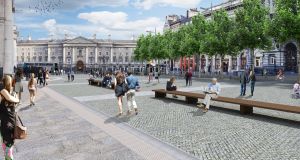 The proposed College Green civic space: plan would have “significant unintended consequences for millions of bus customers and implications for the quality of the civic design of the space”, according to Dublin Bus

Plans to turn College Green in the centre of Dublin into a pedestrian and cyclist-only plaza would have a “socially regressive impact on already disadvantaged communities”, Dublin Bus has claimed.

It wants An Bord Pleanála to allow buses to drive through the new plaza which Dublin City Council wants to make a traffic-free zone.

The council’s proposals, which would stop all traffic, including buses, from running east/west through College Green – from Dame Street to Westmoreland Street or College Street to Dame Street – was “a disproportionate response”, according to the bus company. It would have “significant unintended consequences for millions of bus customers and implications for the quality of the civic design of the space”, it said.

More than 10 million passengers who currently board or alight in College Green would be “displaced” each year if the bus ban went ahead, the company said.

“The displacement impacts will fall on those sectors of the city with less choice or perhaps no suitable public transport alternative and where there are higher concentrations of social disadvantage, thereby imposing an unintended socially regressive impact on already disadvantaged communities.”

The bus company is one of several organisations, including a large number of city businesses, to seek a public planning hearing on the council’s proposals.

In a scathing submission to the planning board, Dublin Bus said the council’s public consultation on the scheme had been “unclear and misleading” as to the extent of rerouting of buses from College Green, and it had “not adequately tested” the impacts of its plans on public transport in the city.

The council had also failed to consider “major incidents and disaster planning” in its scheme.

The council had previously decided to turn Parliament Street, currently one-way, into a two-way street for buses, but dropped this plan in its application to the board in favour of rerouting College Green buses to Winetavern Street, west of Christchurch.

The integration of a bus lane travelling east into the design was “vital” and would avoid “most of the key adverse impacts” of the council’s scheme Dublin Bus said. Failure to do so would “intensify public bus transport into other environmentally sensitive civic routes such as the quays... the knock-on impact for the quays has not been considered”.

The “bus gate” which previously restricted car traffic through College Green, giving priority to buses, had been the “single most progressive element” of the city’s bus priority programme, it said.

The National Transport Authority is undertaking a complete reorganisation of the Dublin Bus network, which is not due to be completed until the end of this year. “It is premature to preclude access to bus in the Civic Plaza until this review has been undertaken,” Dublin Bus said.

In addition to the traffic ban, the council proposes a tree-lined granite paved space with a central water feature of 32 water jets or “mini-fountains” which can be switched off to facilitate major public gatherings and “processional events” such as the St Patrick’s Day parade.

While pedestrians will have free reign through the space, cyclists will have a designated two-way cycle track next to the footpath on the southside – the opposite side of the road from the Bank of Ireland building.

Taxi ranks currently in the College Green area will be moved to adjacent streets. There will be two-way traffic routes for taxis, buses and the new Luas Cross City running in a north-south direction in front of Trinity College.