10 injured as bus crashes into shop on busy London street

Crashed bus operated by Go Ahead that was awarded Dublin contract 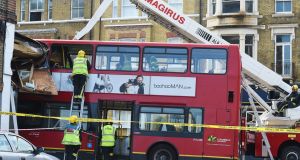 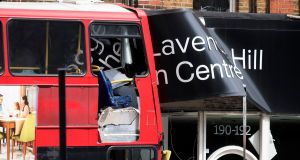 Emergency services at the scene in Lavender Hill, southwest London, after a bus crashed. Photograph: Will Oliver/EPA

Two passengers were rescued after being trapped on the upper deck of a bus after it smashed into a shop in a busy London high street.

A total of 10 people suffered minor injuries when the bus hit the building in Lavender Hill, near Clapham Junction railway station in south-west London shortly before 7am on Thursday.

One passenger reported that the driver said he “blacked out” before the collision.

Another recalled how passengers began screaming as smoke emerged from underneath the vehicle and there was “a lot of blood” as a woman was trapped.

The driver was taken to hospital, police said.

The bus crashed into the front of the Poggenpohl Kitchen Design Centre.

Glass lay shattered across the ground as paramedics tended to people on the top deck.

Firefighters with cutting gear appeared to be trying to cut trapped passengers free.

The bus involved was the number 77 travelling towards London Waterloo.

Andrew Matthews (34) of Wandsworth Town, said he was one of around a dozen passengers onboard.

He said: “I was on the top floor at the back, fortunately.

“I noticed the bus drifting. I heard a smash and saw the roof of the shop going through (the bus) from the front left. It went to the fourth or fifth row.

“I wedged myself in, bracing myself.

“As soon as the bus came to a stop there was yelling, screaming.

“I noticed a lady wedged in the front right-hand side. She was screaming for help. There was a lot of blood.”

Nurse Amy Mullineux (40) of Wandsworth Common, was also on the bus and said the driver told her he had lost consciousness before the crash.

“I spoke to him. He said he blacked out before the bus hit the shop.

“He doesn’t remember hitting anything.

“The paramedic told me they think he had some kind of fit,” she said.

Solange Morin (33) lives close to the scene and was hoping to catch the bus before she saw it crash.

She said: “I saw this woman (in the bus) shouting and banging on the glass.

“I went on to the bus. I talked to her and was holding her hands.

“She was pinned. I wouldn’t have been able to get her out.

“She was so scared because people were shouting fire. There was a lot of smoke.”

The bus was operated by Go-Ahead, a private company that was on Thursday awarded the contract to run 24 routes in Dublin.

In a statement following the incident, Go-Ahead said a full investigation was underway. The company said it had invested £18.4 million in developing and training its employees over the past year.