United States warns citizens to prepare for possibility of pandemic 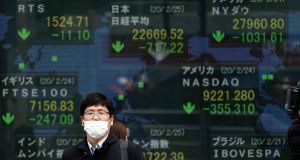 European stocks and US futures tumbled again on Wednesday as the global rout induced by concerns over the impact of the coronavirus outbreak intensified.

Stock markets across Europe fell nearly 3 per cent, sending the regional benchmark Stoxx 600 index to its lowest level since December. The index has now lost more than 9 per cent of its value over the past week as investors dump stocks and move into traditional haven assets. The Iseq was down 1.5 per cent and is down 7 per cent over the last three days.

The fall came after Wall Street shares plunged on Wednesday with a sell-off accelerating after the US Centers for Disease Control and Prevention warned it was likely the outbreak would evolve into a pandemic that could cause “severe” disruptions to daily life in the US. The S&P 500 dropped 3 per cent, bringing its losses to 7.6 per cent since hitting a record high last Wednesday.

US futures pointed to falls of more than 1 per cent at the open in New York, following a sharp sell-off in the first two days of trading this week. Asian markets dropped for a third day in a row.

The sell-off across global stock markets has developed into one of the most significant market retreats since the 2008-09 financial crisis, with investors selling riskier assets on growing fears that the impact of the virus will be more widespread than first hoped.

The number of people infected by the novel coronavirus continued to rise overnight, pushing past 81,000 as the outbreak rippled around the world. Six new cases were announced in Spain on Wednesday morning, while companies including Diageo, Lufthansa and Danone outlined hits to their businesses.

“The recent swings indicate the complacency that appears to have settled over markets during the earlier stages of the outbreak has been dislodged,” said George Efstathopoulos, multi asset portfolio manager at fund manager Fidelity International.

“In our view, the volatility isn’t as surprising as the fact that it took so long to rear its head”.

Writing in the Financial Times, Nouriel Roubini, professor of economics at Stern School of Business, said the risk of a global recession was building. “Investors are deluding themselves about how severe the coronavirus outbreak will be. Despite this week’s big sell-off in equity markets, the worst is yet to come,” he said.

Investors moved further into the safety of government debt, sending the yield on the benchmark 10-year US Treasury note to a fresh low of 1.32 per cent. Yields fall when prices rise.

In Asia, stock markets fell despite traders pointing to what they described as possible buying by government institutions in an attempt to lift markets.

On Wednesday Japan’s Nikkei 225 closed 0.8 per cent lower after falling as much as 2.1 per cent through a key technical line in morning trading. China’s CSI 300 finished the day down 1.4 per cent after being whipsawed between gains and losses, pushing the benchmark into the red for 2020. – Copyright The Financial Times Ltd.