Can worsening floods along Shannon basin be stopped?

With recurring floods in the midlands, there are fears for what climate change will bring 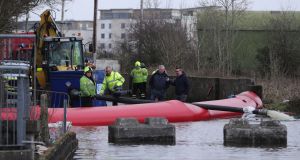 In the past three weeks more than eight inches of rain has fallen along the basin of the river Shannon. It’s the third time in little more than a decade that there has been widespread flooding along the 360km route of Ireland’s longest river.

Taoiseach Leo Varadkar visited affected areas, including Athlone and Carrick-on-Shannon, on Monday to see how the flooding had affected the communities.

The flood tour has become familiar for taoisigh. Some four years earlier, Enda Kenny visited the very same places. His predecessor, Brian Cowen, did likewise in 2009 and was roundly criticised for spending only a few minutes scanning the scenes.

The recurrence of the flooding raises important political questions: why do the same problems keep arising, and what, if anything, have successive governments been doing to stop it happening?

The Shannon is a low-gradient river that, left to nature, would cope with such weather events. But human habitation and activity over millennia, including mass tree felling, arterial drainage schemes and other development have affected the rate at which water comes into the channel, increasing the propensity to flood.

Prof Mary Bourke, an expert on flood risk and management at Trinity College Dublin’s Department of Geography, points to data that shows increases in patterns of flooding in Ireland over the past 60 years.

She also says that, with autumns and winters becoming wetter, the ground is often saturated by the time heavy rains begin.

“There are phases of wet and dry. We are in a wet one at the moment. It’s not just getting wetter, there is categorical evidence that the floods are getting bigger,” Prof Bourke says.

“My concerns are, we are having floods right now that we cannot manage. What is it going to happen down the line when [flooding] caused by climate change begins to occur?”

Varadkar is accompanied by Kevin “Boxer” Moran. Five years ago, before Moran became a TD, he was one of the people who manned the water pumps night and day in Athlone to prevent the swollen river from breaching the flood barriers. He lost his Dáil seat earlier this month but remains the Minister of State responsible for the Office of Public Works, in the absence of a new government, and in charge of flood management.

Since 2015 eight flood cells have been constructed in Athlone on both sides of the riverbank. There is also an emergency aqua dam near the town’s Deerpark housing estate. While there were still pumps in operation last weekend, the situation felt more under control than last time around.

More generally, the outgoing Government committed €1 billion for flood defences and mitigation measures and there are currently 100 projects under way.

The OPW has completed the Catchment Flood Risk Assessment and Management Programme for about 300 vulnerable communities. The problem has now been measured, but solving it will take time and a lot of money.

This week people who came from outlying areas remonstrated with the Taoiseach over recurring flooding in their homes and farms, saying that not enough had been done.

Liam Broderick from Banagher, a member of the Mid-Shannon Flood Relief Group, carries a hand-drawn poster saying there is flooding in Banagher, Lusmagh, Meelick and Shannon harbour. He says some works have been done but these will not solve continuing problems with flooding on his land and around his home.

“They have cut trees and drained the river Al [near Athlone] and erected flood defences in Athlone,” he says. “But nothing is going to change until two major pinch points are taken out of the Shannon. What’s happening is, when you have floods now the water can’t flow away.”

Moran agrees that the points where water gets backed up along the Shannon need to be addressed to lower the level of the river.

“Rural Ireland has been badly affected,” he says. “I was up to Golden Island [near Athlone] this morning to see farmers try to protect land and feed cattle. I am well aware of its impact.”

Prof Bourke says the OPW has been open to more sustainable ways to manage floods rather than hard engineering, including natural water retention levels.

“You use the lay of the land to slow down the water’s movement. You can create a little dam that is porous so water will leak through over 24 hours rather than racing through,” she says. “That has two effects: they reduce the height of the flood and lengthen the period [of the flow].”

She says the key is to slow the flow and having enough of these natural dams in place along the river’s length will achieve that. She also recommends afforestation with deciduous trees rather than the fast-growing, coniferous Sitka spruce.

Prof Bourke makes the general point that “flooding is a natural process and we we will [always] have floodlands”.

With worsening climate change, some people living in isolated areas may be faced with the prospect of moving from homes where they have lived for generations.