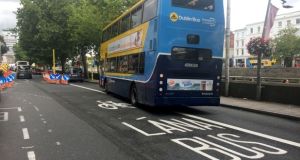 Dublin Commuter Coalition has said it strongly recommends “a big bang introduction” of the BusConnects network redesign rather than it being implemented in stages.

In a submission to the National Transport Authority (NTA) earlier this month, the public transport campaign group said a new bus network implemented all at once would cause “temporary short-term disruption”, whereas a phased introduction “will extend that disruption for years unnecessarily”.

The NTA confirmed earlier this year that the redesign of Dublin’s bus network will be implemented over a “phased basis” between 2021 and 2023 rather than rolled out in one stage at the end of 2019, as was originally stated. The NTA said the phased approach was to ensure “a manageable level of change for customers and bus operators”.

However, Dublin Commuter Coalition said a phased implementation would mean Dubliners having to “not relearn one network once, but relearn several networks, several times over a period of three years”.

“What happens to the plan if the reaction is overly hostile? Will the National Transport Authority have the final say on implementing it? Or will the transport minister du jour be forced to bow to public pressure and cancel the implementation leaving us with a Franken-network”, the submission said.

“The warning signs are already there, with other cities that tried to implement their new networks in stages and the result was chaos.”

The Dublin Commuter Coalition said it is in favour of the project to “vastly improve the bus network in Dublin and the allocation of widespread cycling infrastructure throughout the city”.

In its submission, it also said there is “nothing stopping” the introduction of the 90-minute fare now. Part of the BusConnects plan includes introducing a 90-minute fare to allow trips between bus, Luas and Dart services and as many journeys as passengers chose during that timeframe.

The NTA said it was currently reviewing all submissions and will not comment on individual submissions “until the review is complete”.