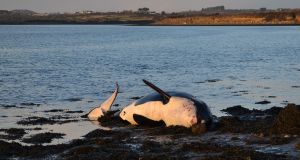 A killer whale that was washed up in Co Waterford. Photograph: Clare Scott

Four killer whales stranded on Irish shores between 2010 and 2017 were found to have “very high” persistent pollutants that may exceed toxicity levels causing significant health effects.

In a study by Galway Mayo Institute of Technology and the Marine Institute, researchers analysed blubber samples from three killer whales stranded in Galway, Mayo and Waterford and a fourth whale, a near-term foetus inside one of the stranded whales. They found pollutants from industrial products, flame retardants and pesticides in the whales. The possible role played by pollutants in the cause of death for the whales is not known.

“Although these concentrations are high, these results are relatively low from a global perspective, particularly in comparison to the highly contaminated transient killer whales from coasts along the north-east Pacific Ocean,” said GMIT doctoral student Moira Schingermann.

Dr Simon Berrow, co-supervisor at GMIT and chief executive of the Irish Whale and Dolphin Group, said the build-up of pollutants and the effects on animal reproduction were “undoubtedly the biggest long-term threat they and species of dolphins and porpoise face in our oceans.”