Deforestation of Amazon continues to soar under Bolsonaro 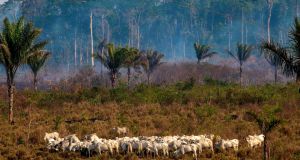 Cattle graze with a burnt area in the background after a fire in the Amazon rainforest near Novo Progresso, Para state, Brazil in 2019. Photograph: Joao Laet /AFP via Getty

August is dry season in Brazil and traditionally the month when recently-felled Amazon jungle goes up in flames.

A year ago images of carbon-rich smoke pouring out of the planet’s biggest rainforest caused shock around the world. It was the moment when the international community realised that as well as administering a self-inflicted wound Brazilian voters might have posed a threat to all humanity by electing far-right populist Jair Bolsonaro as their president.

Many of last year’s fires were in areas illegally cleared of forest.

But the land-grabbers who set them knew they could do so without worrying unduly about the authorities. Even before he was sworn in Bolsonaro had promised to curb the ability of Ibama, the country’s environmental protection agency, to fine offenders. “That party is over,” he warned, as if policing the law was an abuse of authority.

In a country with an endemic culture of impunity the message was received loud and clear. In the year to last August, forest clearance in the Amazon increased 29 per cent compared to the previous 12 months. It was the worst year for deforestation since 2008. And Bolsonaro kept his word. The number of fines and sanctions applied by Ibama since he assumed office has plunged.

It reflects a wider crisis that has engulfed the whole of the environment ministry under Bolsonaro. This is now so grave that the federal prosecution service’s Amazon taskforce earlier this month sought the removal of its minister Ricardo Salles. In making the call, prosecutors accused him of administrative impropriety in deliberately seeking to dismantle the country’s legally enshrined environmental protection regime.

Salles’s notoriety went national in Brazil when a video of an April cabinet meeting was released in which he told his colleagues they should take advantage of the “moment of tranquillity” provided by the media’s focus on the coronavirus pandemic to accelerate changes to the country’s regulatory regime.

In fairness the minister is only carrying out what the president promised to do. But he has gone about his mission with relish, playing an important role in turning Brazil into something of an international pariah because of the perceived anti-environmental obscurantism of the Bolsonaro administration.

That will have pleased the macho anti-globalist types in government and among its supporters. But the few sensible members of the administration have been flagging up the risks of such an approach.

Agriculture minister Tereza Cristina for one is aware of the damage that can be inflicted on one of Brazil’s few globally competitive sectors if boycotts against the country are organised abroad.

Deep-pocketed foreign investors are increasingly strident in expressing their concerns over Brazil’s stewardship of the Amazon. It is a worrying signal for a government hunting inward investment to help revive an economy moribund for much of the last decade and now clobbered by the impact of the pandemic. Brazil’s biggest banks have joined the pressure campaign, aware of the need in a world in which Greta Thunberg has become a global icon to take the country’s environmental responsibilities seriously.

In response to these pressures Bolsonaro has dispatched the military to prevent a repeat of last year’s conflagration and the international outcry it provoked. Whether soldiers can make much of a difference remains to be seen. They have been in the Amazon since the start of May but June saw the 14th consecutive month-on-month increase in deforestation.

The deployment of 2,500 troops in such a vast inaccessible region smacks of little more than a public relations exercise to cover up for the administration’s war on its own environmental regulator. Already facing criticism for its disastrous management of the country’s response to the coronavirus, this latest mission could heap further ignominy on the military if the forest goes up in flames again.

And there are already signs it will. Last month was the worst June for fires since 2007. Trying to get a handle on the situation on July 16th Bolsonaro issued a decree prohibiting the use of fire in the Amazon and the Pantanal wetlands for 120 days.

But those who set the fires clearly believe he has their back, and with reason. Among the measures reportedly being prepared for the region is a government plan to fast-track the awarding of land titles to people squatting on former rainforest which experts warn just rewards past environmental crimes. And creates an incentive for new ones.