Could an ecocide law bring an end to environmental destruction? 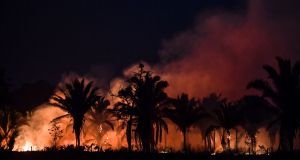 The Amazon rainforest on fire near a highway in Para state, Brazil. Photograph: Nelson Almeida/AFP via Getty Images

The year is 2035; location is The Hague in the Netherlands. Disgraced former Brazilian president Jair Bolsonaro (80) is scheduled to appear before the International Criminal Court (ICC) charged with multiple counts of the crime of ecocide for his role decades earlier in setting in train the final destruction of the once-mighty Amazon rainforest.

The impacts of this devastating event have been felt across the world. According to ICC prosecutors, Bolsonaro acted knowingly and recklessly to accelerate clearance of the rainforest, with flagrant disregard for the impacts either on the regional habitat, the indigenous forest populations or the wider planetary implications of his actions. He denies all charges.

The above scenario is fictitious – for now. Today ecocide – defined as the deliberate systematic destruction of ecosystems – is currently not treated in international law as a specific crime, though there is ample scientific evidence to show it is occurring as a consequence of actions by states, corporations and individuals.

However, the recently convened French citizens’ assembly on climate recommended overwhelmingly that the new crime of ecocide be introduced, and President Emmanuel Macron has promised a referendum on the issue.

Specifically referencing the Amazon, Macron noted: “The mother of all battles is international…to ensure that this term is enshrined in international law so that leaders are accountable before the ICC.”

While human destruction of ecosystems has occurred for centuries, impacts are now accelerating and are increasingly global in nature. The term “ecocide” was coined to describe the devastating effects of the toxic herbicide known as Agent Orange during the Vietnam war, when US forces sprayed around 75 million litres.

This caused the destruction and contamination of more than three million hectares of forests, or nearly a fifth of Vietnam’s total forested area, as well as severely impacting human and wildlife populations in the region.

The backlash against the massive environmental damage resulting from this form of chemical warfare led to a draft Ecocide Convention being submitted to the United Nations in 1973, with a view to it being recognised as an international crime as part of the “draft code of crimes against the peace and security of mankind”. The UN went on to ratify the Environmental Modification Convention in 1977, which aimed at limiting the use of deliberate environmental destruction as a tool of war.

However, by the time the ICC was established in The Hague in 1998, the crime of ecocide had disappeared from the so-called Rome Statute, which created the four key offences over which the ICC has international jurisdiction: crimes against humanity, genocide, war crimes and crimes of aggression against states or regions.

The effectiveness of such international criminal tribunals was demonstrated in the successful prosecution of senior figures, including former Serbian military commander Ratko Mladic and president Radovan Karadzic, who were convicted at The Hague for crimes against humanity during the Bosnian war.

In Ireland eco-artist Dr Cathy Fitzgerald has been lobbying for the recognition of ecocide as a crime against humanity. In 2013 her motion on ecocide to the Green Party agm was passed unanimously.

Her passion on this subject is deeply personal as her late father, Kevin, died aged 58 as a result of severe melanomas which he believed were due to his exposure to Agent Orange when serving as an engineer with the New Zealand military in Vietnam.

“An international law against ecocide is now inevitable if we want to maintain a liveable planet,” Dr Fitzgerald said. “There is also an urgency to address the ecological catastrophe as the Covid-19 pandemic confirms that politics-as-usual is failing to halt our assault on the natural world and the very foundations of life.”

Minister for State for Heritage Malcolm Noonan said: “While there are no plans for a referendum on ecocide in the programme for government, such an initiative could be discussed and debated in the citizens assembly due to be established soon.”

There is precedent. The RTÉ Youth Assembly on Climate recommended last year that Ireland move to outlaw “acts of ecocide”.

Dr Andrew Jackson of the UCD school of law points out that Ireland already has lots of laws in place protecting wildlife, while he describes the Habitats Directive as “among the most powerful instruments of EU environmental law”.

Where things fall down, he asays, is on enforcement at the national level. “Wildlife crimes do not seem to be pursued with the same vigour as crimes against the person or property, while the penalties that are handed down don’t tend to reflect the scale or seriousness of the damage.”

Jackson cites the EU’s Environmental Liability Directive. This was transposed into Irish law in 2008, and since then many incidents have been reported to the Environmental Protection Agency (EPA). However, according to a European Commission report in 2019, just three cases of environmental damage have been treated by the EPA as falling within the scope of the Directive, and all were “addressed under other legislation”.

“There seems to be almost an aversion to pursuing operators using the environmental liability regime, and requiring them to remediate,” says Dr Jackson.

In stark contrast to this, he notes that what is striking about the French proposals on ecocide is just how seriously these crimes would be treated. Offenders on the upper end of the scale face 20 years in prison.

In the case of ecocide carried out by a corporation, such as an energy or mining company, apart from seeking to imprison senior executives, fines could be potentially linked to turnover.

The purpose of such sanctions, Dr Jackson adds, is “to have a dissuasive effect; you don’t want to be imprisoning people, but it has to be at a level where, say, you are the director of a company and realise I’ll have to be really careful how I operate my company because I could find myself in prison.”

An important aspect of the French proposals is that they are explicitly linked to the principle of there being nine planetary boundaries that must not be breached. These include biodiversity loss and extinctions, ozone depletion, climate change, land use, nitrogen and phosphorus flows, fresh water, ocean acidification and chemical pollution.

Several of these have clear application in Ireland. According to Dr Fitzgerald, who has been involved in campaigning for continuous cover forestry, “I would see monoculture and bog destruction as forms of ecocide”.

Last November, Pope Francis proposed that “sins against ecology” be added to the formal teachings of the Catholic Church. Explicitly endorsing the notion that ecocide be treated as the most serious of crimes, the pope added: “This is a fifth category of crimes against peace, which should be recognised as such by the international community.”

The first global assessment of the state of environmental law was published last year by the UN Environment Programme. It found that most of the environmental agreements developed over the past five decades are simply not being enforced. With all life on Earth now directly threatened by climate breakdown, pollution, resource depletion and biodiversity collapse, ecocide must at last be recognised as the gravest of all crimes against humanity and nature.

If ecocide is finally given the legal status it so urgently needs, much of the credit must go to Polly Higgins, a Scottish barrister who spearheaded a vigorous decade-long campaign to have ecocide recognised as a crime against humanity.

Higgins, who died last year aged just 50, explained her epiphany, which occurred one day in court in 2005 while awaiting a judgment in a workplace injury case.

“I looked out the window and thought: ‘the Earth has also been badly injured and harmed’. My next thought actually changed my life: the Earth needs a good lawyer too.”