Six countries suffer from ‘alarming’ levels of hunger, according to 2018 index 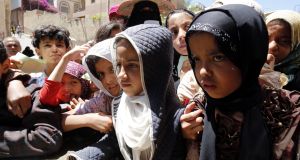 Children wait to receive food rations in Sana’a, Yemen. War-torn Yemen is one of six countries identified in a new report as having ‘alarming’ levels of hunger. Photograph: Yahya Arhab/ EPA

Hunger is a persistent threat to the lives of almost 70 million forcibly displaced people across the globe – the highest number since records began, according to the 2018 Global Hunger Index (GHI) published on Thursday.

Progress has been made in reducing overall global hunger but it has been too slow, and hard-won gains are now being threatened, warn Concern Worldwide and Welthungerhilfe, which compile the GHI annually.

Worldwide levels of hunger and undernutrition went down from a GHI score of 29.2 points in 2000 to 20.9 points in 2017; representing a decline of 28 per cent. Underlying this improvement are reductions in prevalence of undernourishment, child stunting, child wasting and the mortality rate of children under age five.

Six countries suffer from levels of hunger that are “alarming” – Chad, Haiti, Madagascar, Sierra Leone, Yemen and Zambia – while in the Central African Republic (CAR), the situation is “extremely alarming”. A total of 45 countries out of 119 ranked countries have serious levels of hunger.

While progress has been robust in some parts of the world, in other parts hunger and undernutrition persist or have worsened: since 2010, 16 countries have seen no change or an increase in their GHI levels, including the CAR, Madagascar and Yemen. A total of 79 countries have “moderate to extremely alarming” levels of hunger, the 2018 index report warns.

On the large numbers of forcibly displaced people who are compelled to flee conflict, violence, and natural or human-made disasters, the report finds most people are displaced not as the result of just one factor, “but because of a combination of factors. Hunger often figures prominently in their experience.”

Many of the countries with the highest incidence of hunger are also places affected by conflict, political violence and population displacement – hunger is often a cause and a consequence of displacement.

In seven countries where no GHI scores could be calculated, hunger is a cause for significant concern, it says: Burundi; DRC, Eritrea, Libya, Somalia, South Sudan and Syria. Violent conflict, political unrest, and/ or extreme poverty have caused substantial flows of forced migration, which is closely associated with food insecurity.

Concern’s chief executive, Dominic MacSorley, said it was staggering that 124 million people were suffering today from acute hunger and, in some cases, starvation. “This is an increase from 80 million two years ago. And that means more people on the ground are dying from preventable causes, mostly conflict. And the majority of those who die are children.”

He added: “Too often, we are drawn away from any focus on root causes and toward misleading representations of a global crisis.”

Instead, there was a need to tackle the political factors that led to hunger and displacement including conflict, he said. “Hunger and forced migration are painful realities for millions, but they are not inevitable. This drastic state of affairs has yet to spur the kind of political leadership and action that is so urgently needed . . . Hunger is political and progress is possible.”

More worryingly, they were seeing the issue of migration become a lightning rod for new political discourse that is increasingly more hard-line than humanitarian.“This year’s GHI is not just a renewed call to action on hunger and forced migration, but an urgent wake-up call for a resurgence of humanity in how we address the shocking truth that, in a world of plenty, millions of people still go to bed hungry each night.”

In 2015, the world’s countries committed to achieving zero hunger by 2030 but, Mr MacSorley said, they were not on track to meet that goal.

The GHI report calls for more to be done to address the political causes of forced migration and hunger, and provide long-term solutions for displaced people and their host communities.

The additional threats of climate change impacts are outlined in the report. Natural disasters – droughts, floods and severe weather events – lead to hunger and substantial displacement only when governments are unprepared or unwilling to respond because they either lack the capacity or engage in deliberate neglect or abuse of power.

On climate actions, the report calls for “support policies and programmes to build resilience and preparedness for the adverse impacts of climate change, particularly as it affects agriculture and food security”.

The unique vulnerabilities presented by Bangladesh’s geography are highlighted: “Because of its densely populated, low-lying coastal landmass, it is also considered one of the world’s most vulnerable countries to the effects of climate change and rising sea levels.”

In Senegal, the report says, “despite its successes, Senegal still faces major challenges, including threats from climate change such as coastal erosion, disruptions to rainfall patterns, and salinisation of soils.

“Support is needed for policies designed to prevent conflict and build peace as well as policies that reinforce government accountability and transparency, which make it more difficult for governments to shirk their duty to meet citizens’ basic needs for safety and food security,” it notes.

As most forced migration is protracted, lasting years or generations, long-term solutions for displaced people – including income-generation opportunities, education and training – are vital, it concludes. Humanitarian assistance is not designed to support people over the longer term, it finds, while funding for development-oriented support for protracted displaced persons – those displaced longer than five years – is in short supply.

People facing food insecurity tend to seek the closest possible place of safety. As a result, 85 per cent of all displaced people are hosted in low- and middle-income countries. Since the vast majority of food-insecure displaced people stay in their region of origin, support should be focused in these areas, it recommends.

As displacement can bring food insecurity to host populations, stronger support for host communities is crucial, it suggests.