Clean-up after 70kg of plastic found along south Dublin coast

November 5th, 2018: Swimmers at the Forty Foot in Sandycove speak about the 70 kgs of “tooth-pick sized” plastic that were recovered from the area at the weekend. The plastic was used in the reconstruction of of Dun Laoghaire Baths. Video: Kathleen Harris 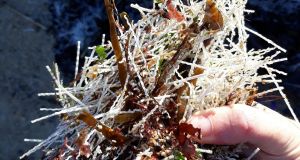 Some 70kg of “tooth-pick sized” plastic fibres being used in the reconstruction of the Dún Laoghaire Baths were recovered from the south Dublin coastline at the weekend.

The contractor restoring the baths, the Siac/Mantovani Group, has acknowledged the plastic fibres came from its site. The company said the fibres were used primarily to bind and strengthen concrete which was placed at low tide on the sea bed to form the foundations for pier works.

The company said the fibres were chemically inert and alkali proof, and about 1mm in diameter and 50mm in length.

The council said it was continuing to engage with the contractor “and third-party environmental consultants in investigating the exact cause of the pollution incident and level of continuing environmental hazard”.

It had been informed by the contractor that “the plastic strips used in the concrete setting works are chemically inactive and do not pose a damage to water quality” but it has engaged an independent environmental consultant to assess the impact on sealife and wildlife.

Environmental groups have also criticised the statement on water quality pointing to the potential for harm to marine life should pieces of plastic be ingested.

Mindy O’Brien, co-ordinator of Voice of Irish Concern for the Environment, said it was clear that marine life could and would see the bits of plastic as food. She said birds would likely pick up bits of the plastic to use in nest building or as food for their young.

All work on the baths site has been stopped temporarily and underwater, air and shoreline assessments were carried out at the weekend to assess the full extent of the incident. Notices to bathers and beach users regarding presence of plastic particles remain in place.

Harriet Donnelly, a daily swimmer who was one of the first to discover the plastic contamination on Friday, said she had noticed on Monday that the plastic appeared to be breaking up, into smaller pieces.

Ms Donnelly, whose daughter Flossie (11) raised money to buy two “sea bins” to improve water quality in Dún Laoghaire Harbour, spent most of Friday working on the clean-up with other swimmers. She said “seaweed was covered in it, if you put your hand in the sand it came out covered in it”.

Cllr Ossian Smyth (Green Party), the council’s cathaoirleach, said he had seen “millions” of pieces of plastic when he went for a swim on Saturday, but had not seen any on Sunday.

“If I see a man dumping a sack of plastic on the beach I would call the gardaí. I expect the same in that if there is negligence in this case that the gardaí would take action”.

Siac said inspections and clean-ups had resulted in “all visible fibres” being removed.

In a statement the company said: “Divers have also inspected the deeper areas adjacent to shore and rock pools and have found nothing . . . An environmental inspection from the air which was carried out on Sunday morning did not yield any negative impact to wildlife.”

The company said it had “informed all of the relevant authorities in relation to this issue and are working closely with all stakeholders”.