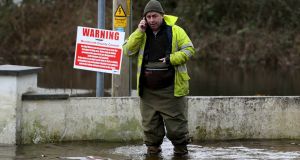 A number of houses in a Co Clare village have been evacuated as the flooded river Shannon swept around their homes and threatened to burst its banks in other parts of the country.

Several residents of Springfield, Clonlara, Co Clare, were moved from their homes and around 7,000 sandbags and pumping stations were delivered to 10 houses in the village, some of which have been cut off from roads, and are now effectively languishing on islands.

In Carrick-on-Shannon, Co Leitrim, businesses and homeowners were bracing themselves for the impact of more rain on Sunday night, with Met Éireann forecasting accumulations of 20mm to 25mm – “with higher totals possible in upland areas” – overnight.

St Mary’s football pitch in the centre of Carrick was submerged in water on Sunday, as was part of the car park in the retail and business park on the Sligo road.

Grainne Caldbeck, owner of Enhance Health & Beauty, close to the Carrick Cineplex, couldn’t access her salon on Sunday because of the depth of the flood waters .

However, following promises that the area would be pumped and a raised platform provided to allow customers get to her premises, she is hoping it will be business as usual this week.

“Four years ago we had this for nine weeks but we stayed open,”she said. “If we can get in tomorrow we will be open because I have five staff and they all have kids and they need their wages.”

While it is a “stressful time”, she said she was thinking of those people struggling to keep water out of their homes as well as farmers worried about livestock.

Joe Dolan, owner of the Bush Hotel in the centre of town, and a director of Fáilte Ireland, is getting worried too.

“It’s getting uncomfortable,” he conceded. In 2015, 170 car-parking spaces at the back of his property were submerged in water and he struggled to keep going, conscious that he had a a workforce of 60 who needed their jobs. “In 2015 we were in the early stages of recovery and that set us back a year,” he explained.

“Nothing much has changed since then. We can manage the floods a little better but we are still at the behest of the elements.”

Farmer Michael Heslin has 40 acres of farmland under water on the Boyle side of town and has moved a lot of his livestock to high ground. “I am lucky that I have high ground to move them to,” he pointed out.

Like Sean Murtagh, owner of Cryans Hotel, which faces the river but is so far unaffected by these floods, he believes that sluice gates up the river in Jamestown are part of the problem.

“The water would be 300mm lower if those gates were lifted,” said Mr Heslin. “Instead, the County Council is running around with sandbags.”

Mr Murtagh said the sluice gates were not fit for purpose. “They are blocking the water and if there is more heavy rain, Leitrim village, Carrick and Drumshanbo will suffer.” The hotelier is also worried that if floodwater keeps coming down from Lough Allen, the ESB will be forced to open the gates to release water.

“The problem is they may not have any choice if this continues because the water will burst through the gates and that will be a disaster,” he said.

Local county councillor Enda Stenson says that despite all the promises made in 2009 and when the floods struck again in 2015, there has been no major remedial work or protections put in place.

“We are on very thin ice and with our tourist season due to start in three weeks at St Patrick Day we all have our fingers crossed,” he said.

“This is about people’s livelihoods and to be honest with you if this continues we are facing disaster. We were promised the sun, moon and stars the last time this happened and I know it’s a cliche, but if this was the Dodder in Dublin 4 I wonder would it be allowed to happen.”

Taoiseach Leo Varadkar is on Monday due to visit Carrick as well as Athlone, where Westmeath County Council said high water levels had led to “water on the minor roads in the lower parts of the town”.

In Springfield, Co Clare, the council’s senior engineer John Leahy said an increase in rainfall was forecast for the area overnight which would likely result in floodwaters rising.

“We’ve had crews here all week making preparations. There are some houses that have been cut off and some of those residents have been put up in local hotels,” Mr Leahy said.