Shannon floods: Locals divided on how to tackle crisis

Taoiseach Leo Varadkar has visited parts of Athlone and Carrick On Shannon that have been hit by recent flooding. Video: Bryan O'Brien 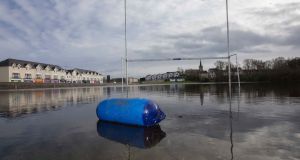 “I have my wellies in the boot,” Taoiseach Leo Varadkar remarked helpfully as he gazed into the flood waters lapping close to the doors of Carrick-on-Shannon cineplex, as a few photographers waited to see how he was going to negotiate the obstacle ahead.

A short time later he asked two Leitrim women who wanted to talk about the floods threatening their homes whether the media should switch their tapes off.

“It can become a bit of a circus,” he declared, and how glad everyone was that he hadn’t needed to don the wellies and wade across in order to get to Grainne Caldbeck’s Enhance Health & Beauty centre for a report on day-to-day life in a flood.

In fact, a newly-constructed gravel walkway in the retail park on the Sligo side of Carrick had rendered the wellies unnecessary and kept businesses open, much to the relief of people like Grainne and Shamzuri (Sham) Hanifa, owner of Synergy restaurant. Both gave Mr Varadkar a good insight on how difficult it is to run a business in a town that has had three major flooding episodes since 2009.

“I am wearing yellow because I am trying to be positive,” Ms Caldbeck told him. The water outside her door was “not the feng shui we want”, she joked, before explaining that she had endured nine weeks of floods in 2016, but had remained open with the support of loyal customers.

In Synergy, Sham outlined how he had lost all his staff when he was forced to close for seven weeks the last time the floods hit. “It took six months to recover,” the popular businessman recalled, stressing that all people want is a solution sooner rather than later.

A solution sooner or later, and whether it should be expensive or relatively inexpensive, was the subject of some passionate debate in Carrick-on-Shannon, much to the bemusement of the Taoiseach, who said more than once that he wasn’t an engineer and so had to rely on the opinion of the experts.

But experts, like doctors, differ, as the Taoiseach saw in Carrick, where Leitrim County Council’s chief executive Lar Power and Maurice Buckley, chairman of the OPW, were definitely in favour of a €9 million plan based on the CFRAM (the National Catchment Flood Risk Assessment and Management) report. The report is proposing a 1.5km wall or similar barrier to beat the floods.

Liam Farrell, owner of the cineplex, who reckons he lost a six-figure sum in the 2015/16 floods, is chairman of the local flood action committee. He passionately believes the €9 million plan is not the solution and that remedial works at the weir in Jamestown, which have an estimated price tag of €100,000 to €150,000, would be much more effective.

The €9 million plan would be like “having a cut artery and deciding to cut your toenails to deal with it”, he says .

The county council boss does not agree. “The river Shannon is a very complex system now and there is a lot of infrastructure on it. You have to be very careful when you find one piece of the solution, that you don’t cause a problem elsewhere,” Mr Power told reporters.

But the flood action committee includes a retired county council engineer, Brian Kenny, who assured Mr Varadkar that you can fix the problem at Jamestown without causing any negative effect elsewhere on the Shannon.

The Taoiseach may have been confused, but local TD Frank Feighan who accompanied him said the local committee has come up with solutions before and their insights have always been “helpful”.

Liam Farrell told Mr Varadkar that the Jamestown weir must be fixed “so we can get on with our lives”.

He still recalls with horror that he had Star Wars screenings during the last flooding crisis. “Fans would go to Mars to see Star Wars but they wouldn’t come to Carrick,” he said.

Meanwhile, Pat Mason, battle-weary but standing firm, said the only way he will be leaving his flood-hit Co Clare home is in a coffin.

“The only way they’ll get me out of here is in a box,” he announced, as he watched the river Shannon slowly swallowing up his garden and driveway.

Springfield, Clonlara, where he and his wife Margaret and 12 other families reside, is submerged.

Ten homes, protected by 7,000 sandbags, are under threat of being flooded.

Despite the best efforts of Clare County Council workers building up the bagged flood defences, residents began pumping water out of their gardens and driveways as the deluge crept in around them.

The ESB, which operates the Parteen weir located upriver from Clonlara, increased the flow of water to maintain safe levels within the dam. However, the knock-on effect is large-scale flooding along the lower Shannon basin, including Clonlara.

Two families have been evacuated to a local hotel, but Pat Mason has stayed.

Despite previous floods surrounding his home, Mason, with the aid of pumps, his two children, and neighbours, always dug in and managed to keep the water literally inches from his door.

“I’m ready for the battle again,” he said.

Local roads were impassable by car, so farmers ferried water bottles to homeowners cut off from dry land.

Clare County Council also delivered Portaloos to residents whose septic tanks and water wells were compromised and backed up by the floodwater.

Life-buoys were also secured to posts along roads overwhelmed by the flood, which served to remind how dangerous conditions have become.

“Were in the same situation we have been [in] for years, no improvement whatsoever,” Mr Mason said.

Past promises by politicians have been “a waste of time”.

Seán Lenihan, a senior engineer with Clare County Council, said the local authority was hopeful of resubmitting, in the next “two to three weeks”, a planning application to construct a 2km mud embankment and pumping station to try to alleviate flooding.

A previous application to build the proposed local flood defence was withdrawn after an objector raised concerns about the environmental impact of the development.

“We went back to the drawing board to make sure we had addressed all those issues and we are happy that we have,” Mr Lenihan said.