Pollinators, especially bees, are in decline due to habitat loss; disease and pesticide use 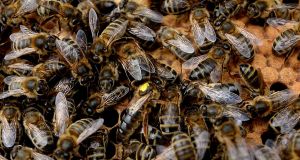 Irish workers bees and a queen bee with a yellow spot on back pictured in a hive. Photograph: Cyril Byrne/The Irish Times

Ireland has joined a group of 20 countries trying to halt a decline in bee populations that threatens food production and biodiversity.

Pollinators, especially bees are in decline due to a deadly combination of loss and degradation of their habitat; disease exacerbated by trade practices, pesticide use (especially insecticides) and climate change.

Bees are vulnerable to loss of flowers because they feed on nectar and pollen from flowers all through their lives – as both adults and larvae.

The “Coalition of the Willing on Pollinators” was formed in Columbia at a meeting of the Intergovernmental Platform on Biodiversity and Ecosystem Services (IPBES) in Medellin.

Ireland has joined 20 countries committed to working together to protect pollinators.

Since 2015, Ireland has an All-Ireland Pollinator Plan (AIPP) in place. This was one of the first cross-sector attempts by any country to arrest the decline in pollinators.

The initiative was led by Dr Una Fitzpatrick of the National Biodiversity Data Centre in Co Waterford, and botanist Prof Jane Stout of Trinity College.

Since the plan was announced, more than 80 public and private organisations across the Republic of Ireland and Northern Ireland are working together to protect pollinators, while harnessing public concern for bee decline.

The plan identifies 81 actions to make Ireland pollinator friendly; 54 per cent of which have been completed and 37 per cent in train.

These include protecting pollinator habitats for nesting and forage; reducing pesticide use, undertaking pollinator-friendly planting and reducing mowing.

New supports for beekeepers and horticultural growers are in place along with research to track progress.

The Heritage Council and Bord Bia are also co-funding a project officer at the National Biodiversity Data Centre to help implement the plan. The AIPP has also achieved international recognition.

“We did not imagine it would become so successful and influential. At the time, Ireland was suffering the fallout of the economic downfall, and conserving insects was far from most people’s priorities... joining the ‘Coalition of the Willing’ is a significant advance in our work to conserve Ireland’s pollinators,” said Prof Stout said.

Participating countries commit to taking action to protect pollinators and their habitats by developing and implementing national pollinator strategies, and to sharing knowledge on new approaches, innovations and best practices.

Ireland already meets many of these commitments via the AIPP, she added, such as making Ireland pollinator-friendly on farmland, public land and private land – and raising awareness of pollinators and how to protect them.

“But we need a concerted effort by all citizens, as well as public and private bodies, to make a real difference for pollinators. Raising awareness and signing up to the Coalition is only the first step.

“Making a difference in our policies and actions is required in order to conserve these and other important elements of our natural capital, which provide so much for our society and well-being,” Prof Stout said.