System for reporting illegal dumping in scenic spots is ‘ineffective’ 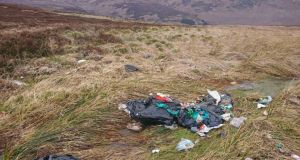 The lack of a prompt response to widespread fly-tipping of rubbish along one of the most scenic routes through Co Wicklow and south Dublin is allowing the problem to fester, according to a concerned local resident.

Dara Grehan, who has photographed evidence of recent dumping at 15 locations along a short stretch of the R115 which passes through the Sally Gap, has claimed the reporting system for highlighting this illegal activity is ineffective.

“I have reported this before, three weeks ago by phone. I was informed that it would be cleaned up. It has not been. And I am very upset by this,” he said.

“I am sick to death of seeing illegal dumping on that road. I will not rest until it is cleaned up, and actively monitored/patrolled on a regular basis. The R115, the main road to the Sally Gap, is teeming with tourists from all countries every weekend. What sort of impression are we willing to depart to them?”

Mr Grehan charted the location and types of rubbish he found along Military Road between Kilakee carpark and Glenasmole viewing point, and first reported the problem in February. He travelled on the route again on Sunday last.

The lack of a prompt response at such an important scenic location, he said, suggested “a lack of concern” among authorities which were funded by taxpayers’ money – especially when he felt the area could be cleaned in two hours.

He described finding “medical waste, latex gloves and medical wrappers, probably syringes too, several black bags of it. And household rubbish, nappies, plastic everywhere...and in lots of various locations, both sides of the road”.

“From a cyclist’s point of view, there are numerous dumping locations along that road from the Kilakee carpark heading south towards the Glassamucky viewing point over a range of about one or two kilometres. To put a figure on it, I saw about 15 or so individual areas with several burst bags strewn around in each.”

There is a sign with information about illegal dumping and a number to dial, but there is no phone signal up around there, he said. “Also, the EPA’s See It /Say It app only allows the user to take a picture at the actual location, and not upload a picture, which is also useless, because of no phone signal up there.”

Ian Davis project manager of Pure (Protecting Uplands and Rural Environments), a project to combat illegal dumping and fly-tipping in Wicklow and Dublin, confirmed his team backed by community volunteers and a truck had cleaned the area stretching from Kilakee carpark to Sally Gap on Friday last.

They also cleaned nearby Piperstown Road, “a notorious area for dumping”, and White Road, a location in the area often used for film productions.

“I understand people’s frustration and anger. They feel nothing is being done. It’s a difficult task. We are lucky we have a lot of groups working with us,” Mr Davis said.

Pure monitors and removes rubbish from 175 miles of road in Wicklow and south Dublin, Mr Davis said. Last weekend it collected 55 bags of rubbish along a 12-mile stretch near Stratford-on-Slaney off the N81 in west Wicklow.

1 Covid-19 : State moves to Level 5 for six weeks with hopes of ‘meaningful’ Christmas celebrations
2 Life under Level 5: What will the next six weeks look like for Ireland?
3 With dramatic U-turn, Government weakens its own authority
4 Gardaí, media to self-isolate as officer gets positive Covid-19 result after JoJo Dullard briefing
5 Nphet letter predicts 50 daily cases by Christmas after six-week lockdown
Real news has value SUBSCRIBE