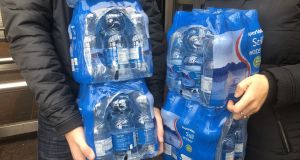 There was a run on bottled water in shops and supermarkets after a boil water notice last month. Photograph: Alan Betson

A boil water notice has been reimposed for some 600,000 people in the greater Dublin area, less than a fortnight after the last one was lifted.

Those in the areas affected by the boil water notice can use only boiled or bottled water for drinking and in food preparation.

Late last month, a boil water warning notice was put in place after a mechanical issue at the Leixlip treatment plant caused concerns about the quality of supply.

Irish Water and Fingal County Council blamed the latest precaution on heavy rain and “turbidity”, or cloudy water due to suspended particles, in the source water for the Leixlip plant, which exceeded acceptable levels.

“Plant operators reacted quickly before alarms were activated and shut down the old plant to stop this water entering the network. There were no issues at the new plant, where the level of turbidity was managed by the newer technology on site,” they said in a statement.

“It was essential to re-start production at the old plant, which produces 20 per cent of drinking water for Dublin, otherwise significant restrictions and outages would be inevitable. As Irish Water cannot guarantee the quality the water from the old plant, a boil water notice is now in place.”

Social Democrats co-leader Roisín Shortall described the latest malfunction as shocking. “Irish Water must be made accountable for this scandalous failure in the provision of the most basic public service.”

The initial problem was as a result of the disinfectant process for the water at the Leixlip plant being compromised.

There was a run on bottled water in shops and supermarkets with many places selling out.

A Boil Water Notice is in effect for all those supplied by the Leixlip Water Treatment Plant. For areas affected please see below map. pic.twitter.com/2KyqSsEczo

“We are very disappointed that a boil water notice has to be imposed again but as we outlined the last time, our number one priority is the public health and the safety and well-being of our customers,” he said.

“The choice we were faced with was customers having a severely restricted water supply for a long period of time or having water for sanitation purposes such as showering and flushing of toilets. We were left with no option but to resume production at the old plant in the knowledge that a boil water notice would then be necessary.”

Irish Water is due before the Oireachtas housing committee on Tuesday, where it is expected to say it is not possible to run plants like the Leixlip one “under the current working arrangements”.

Managing director Niall Gleeson will tell the committee a “plant of this size cannot be reliant on the sole response of individuals,” and argue that all available technology must be used to prevent such a failure occurring again.

Noel Rock, the chair of the committee, said it was “very frustrating” to see a second boil water notice introduced. “600,000 people are back on boil water notices. They deserve clear answers as to why this is happening,” he said.

An audit of the Leixlip water plant and the events leading up to the first boil water notice found the level of treatment is not sufficient to manage the risk posed by the River Liffey source water.

It criticised Irish Water and Fingal County Council for failing to implement the recommendations of an audit in March, and found also that several alarms had been triggered in the run up to the October boil water notice before action was taken. According to the audit, a blockage at the treatment plant was caused by small particles originating from two storage plants that are around 25 years old.

Sinn Féin councillor Daithí Doolan said it was an “absolute travesty” and “unacceptable that Irish Water would bring us water not fit to drink in Dublin”.

Green Party councillor Donna Cooney called for “urgent action” from Irish Water. “Yet again we are back on a boil water notice. It is simply not good enough. Clean drinking water is a most basic need.”

Fianna Fáil councillor Mary Fitzpatrick said it was “totally unacceptable that people cannot have confidence the water coming out of their taps is safe”.

Independent councillor Mannix Flynn said the second boil notice indicated a “complete failure” of Irish Water. “Who would want to come to this country with scummy, dirty, filthy water?”

Lord Mayor Paul McAuliffe agreed to a proposal from several councillors that he would seek a report from Irish Water on the issue.