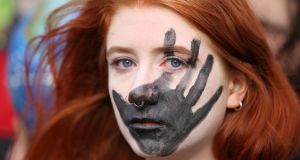 Four climate change activists lay in pools of imitation blood outside the Burlington Hotel in Dublin on Wednesday to protest against the Atlantic Ireland conference held at the venue.

The four were part of a group of Extinction Rebellion activists protesting against the conference organised by the Irish Shelf Petroleum Study Group, a petro-chemical industry research and exploration organisation.

About 25 activists attended the protest to call on the Government to revoke all oil and gas prospecting licences, enact the Climate Emergency Bill 2018, and cancel the proposal to build a fracked gas terminal at Shannon.

Following disturbances at the first day of the conference on Tuesday, when some activists set off an alarm during speeches, the hotel erected steel barriers at the entrance to their car park and their pedestrian entrances on Wednesday afternoon and nine gardaí attended the protest.

The four protesters stood in white boiler suits before four of the their colleagues poured the fake blood over them on the footpath outside the entrance. They then fell to the ground remaining silent for five minutes before leading protest songs.

Activists also held a plaster cast model of the globe, which was set alight to represent the Arctic on fire.

Hotel representatives said they did not wish to comment on the protest.