Dim the lights: Our world without darkness is an unnatural disaster

Michael Viney: The nocturnal dazzle of the western world is upsetting the natural order 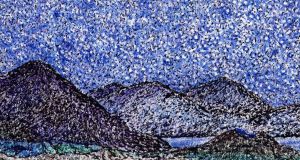 Not until the spread of light bulbs 150 years ago did bright light seriously disrupt the boundaries of night and day. Illustration: Michael Viney

Last January, deep in the polar night, some 70 academics, researchers and artists gathered for a conference on Svalbard, Norway’s remote Arctic island. Its 2,500 inhabitants are actually outnumbered by the local polar bears, so that the visitors were warned not to wander out of town on their own.

Their conference title was, appropriately, Darkness and contributions from some Irish universities addressed an overwhelmingly cultural agenda.

From Maynooth, for example, Dr Elizabeth Boyle discussed the “dark speech and primordial chaos” of early medieval Ireland. Trinity professor Stephen Matterson was “restating the Romantic Night: from agency to negation”. And from University of Limerick, Dr Claire Downey surveyed “Shades of darkness and discontinuity at the heart of the City of Lights”.

The weight of literary and poetic exploration (as in an American study of “The nocturnal power of slime in Coleridge’s Rime of the Ancient Mariner”) spoke to the role of darkness in human psychological history. It is a largely lost experience, at least in the burgeoning nocturnal dazzle of the western world.

One panel at Svalbard discussed light pollution of the night sky and the loss of the stars – “all the light we do not see”. In this invasion of a vital human habitat, the Milky Way is no longer visible to a third of people, including 60 per cent of Europeans.

This is the major theme of the 14th European Symposium for the Protection of the Night Sky, which opens tomorrow in Mulranny, Co Mayo. Here, at the fringe of Ireland’s pioneering Dark Sky Park, centred on the Nephin mountains, Irish and European scientists, architects, ecologists and allied activists will weigh the growing impacts of light pollution.

In his introductory address, Prof Brian Espey, a TCD astrophysicist, will chart the spread of light across Ireland, especially during the Celtic Tiger years. This is now intensified by changes in its brilliance and character that brings new threats to human and ecological wellbeing.

Local authorities and road engineers are switching from the amber warmth of sodium lighting to that of white-light 4,000K LEDS (light-emitting diodes). This follows government requirements to cut energy use, costs and CO2 production. In the past two years, says Dr Espey, Ireland’s LED lighting has jumped to almost a fifth of installed power.

The US-based International Dark Sky Association has given special recognition to Ireland’s two “dark sky parks” in Mayo and Kerry. It is also deeply concerned with downside impacts of LED lighting, notably of “blue-rich” wavelengths that come with the lowest costs. It is positive about the energy savings of LED but urges better control of its blue-light content (google “New IDA LED lighting practical guide”).

Blue LED light – intensely white to the human eye – disturbs the American Medical Association, which voiced its anxieties in 2016. Used in high-intensity designs on roads, the AMA argues, it creates “discomfort and disability”, especially in older drivers. In ordinary streetlights, it suppresses melatonin essential to good sleep. In night workers this can lead to “impaired daytime functioning and obesity”.

In the natural world, blue-rich light upsets circadian rhythms, in evidence widely spread across the animal kingdom. Its shorter wavelengths scatter more widely, intensifying sky-glow that keeps city dwellers from seeing the stars. In the countryside, unshielded farmyard fittings spill their LED glare into the sky, and oncoming LED headlights can dazzle drivers on unlighted roads.

At the Mulranny symposium, a young researcher, Dénes Száz, will describe an EU-funded environmental project that has changed the whole public lighting system of two villages in dark sky parks in Hungary. Prompted by the Dark Sky group, it has changed the intensity and spectrum of LED highway lamps to study the effect on the ecological environment.

Before the changes, for example, mayflies from the Danube were swarming around high-intensity lights on bridges and laying their eggs on the asphalt road. Tested for the attraction of various colours and wavelengths, LED beacons now draw egg-laying mayflies to the river’s surface, their natural habitat.

Following on from fire, humans were quick to find means to dispel the immediate darkness, haunt of real and imaginary dangers. But not until the spread of light bulbs, a mere 150 years ago, did bright light seriously disrupt the boundaries of night and day. It was the first shock to circadian clocks of body and mind that had evolved over thousands of years.

Once I spent three summer months in the High Arctic, in which the sun kept circling the sky, dimming at most to amber. A world without the punctuation of darkness, its endings and beginnings, can become a disquieting place.

After a week or two of fretting, I wore a blindfold to sleep. And at length, back in Mayo, among the moths and bats, I was actively glad to wrap the dark night around me like a comfortable old coat.