Party does not give targets in bid to avoid promises ‘auction’ 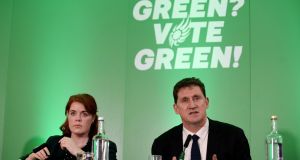 The State needs to increase spending on home insulation to at least €2.5 billion a year if it is to meet targets to cut emissions, according to the Green Party.

Publishing their manifesto in Dublin on Saturday, the Greens claimed it was the only party capable of playing “senior hurling” on climate change.

Its manifesto calls for a 7 per cent per year fall in emissions to reach the EU CO2 reduction target of a minimum 50 per cent by 2030.

The current government target is a 2 per cent annual reduction.

The Greens also want net zero emissions in Ireland by 2040, some ten years ahead of most other parties.

Their manifesto does not give specific numbers for targets for housing, on tax measures and health spending (although it agreed that €5 billion in additional spending would be needed for Sláintecare over five years).

It refused to do so because it said it did not want to get involved in a meaningless “auction” on promises.

Party leader Eamon Ryan said if Ireland was to reach its emissions reduction goals it will need to spend a total of €50 billion over 20 years to retrofit 750,000 houses to improve energy efficiency.

The Green Party said the State did not currently have the resources to retrofit homes at scale.

As a first step the party is proposing allocating of €210 million per annum for retrofitting, and a budget of €40 million to train 20,000 workers who can specialise in this area.

Mr Ryan said the party would increase funding for this once enough people had been trained.

The manifesto was launched by Mr Ryan, by deputy leader Catherine Martin, Senator Pippa Hackett and Cllr Neasa Hourigan in the Radisson Blu Hotel in Dublin.

The party has called for the investment in public transport to be doubled and it wants 20 per per cent of all transport funds ring-fenced for cycling and walking. It also proposes that all students in the State be entitled to free public transport, at a cost of €60 million per annum.

It has also set an ambitious target of 5GW by 2030 and 30GW by 2040 of energy to come from offshore wind energy, generated on floating turbines in the Atlantic and Celtic Seas.

The Green Party has also set a target of 700,000 solar panels on Irish homes as well as 50,000 on commercial premises. It has called for an immediate nationwide ban on smokey coal.

On education, Ms Martin said the party wanted the pupil-teacher ration to drop from the current 25 to 1, to 20 to 1 over the lifetime of the next government.

The manifesto also calls for social houses to be built on public land but, unlike other manifestos, the party has not specified how many, saying it would refuse to enter the “numbers auctions” of other parties.

The manifesto does not contain much detail on cost, with Ms Hourigan saying the costs are similar to the ones in its pre-budgetary submission.

Asked if its transport policies would mean some of the 60 road proposed projects would be mothballed, Mr Ryan replied his party could not stop everything. But he pointed out that not one cycling or walking project was being progressed at the moment.

“There is no point in giving tax cuts and then having people stuck in traffic for two and a half hours,” he said.

The manifesto returned to a favourite Green theme of a basic income, which has been in its manifestos for over 30 years.

“The idea is that nobody will be left behind, that everyone should have a basic income... We feel it will require a new Green Deal to achieve,” said Ms Hourigan.

Mr Ryan said the main difference between his party and the others was on its approach to responding to climate change.

He said that the big parties had showed a lack of ambition. Mr Ryan said there was nothing in the manifestos of the other parties to show how Ireland could reach its emissions targets.

The party’s policies as they affect rural Ireland has been seen as a soft underbelly, confining its support to urban areas.

Mr Ryan and Ms Hackett both rejected the argument that the Greens were against rural Ireland.

“The fallacy of ’this will not be good for rural Ireland’ will have to stop,” he said.

Ms Hackett said: “We have the money from the CAP budget. The model of farming (will need to) be shifted around. It will always be about producing food but we can produce better food, hand-in-hand with farmers doing biodiversity, supporting habitats and rewetting lands.”

Mr Ryan also paraphrased a comment made by a Fianna Fáil minister to the Greens when they first entered government 13 years ago to the effect they were now playing “senior hurling”.

“We are the only party able to play senior hurling when it comes to climate change,” Mr Ryan asserted.