One Change: A single almond takes about three and a half litres of water to produce 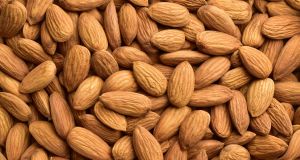 An estimated 82 per cent of the world’s almonds are grown in drought-afflicted California. Photograph: iStock

Nuts are one of those wonder foods that we’re regularly told to eat more of. Full of anti-oxidants, they can reduce the risk of heart disease and diabetes, and promise numerous other nutritional and health benefits.

While peanuts are the most popular nut worldwide (though technically they’re a legume, and grow in the ground), almonds come in second place. Their consumption has rocketed in recent years, particularly with the rise of the “clean eating” phenomenon.

Everyone from the Kardashians to Victoria Beckham have enthused about their benefits, while the author Joan Didion famously used to eat handfuls of almonds for breakfast before starting her writing day – though usually with a can of Coke. More recently, almond milk has become popular as plant-based alternative to dairy.

But what about their environmental footprint? Are almonds bad for the environment?

One of the big issues is water. A single almond takes about three and half litres of water to produce. Most almonds – an estimated 82 per cent – are grown in drought-afflicted California, where it constitutes a multibillion-dollar industry. The number of almond orchards has doubled in the last 20 years in California.

These large, industrialised and mono-crop farming practices are not good for biodiversity, while the year-round irrigation required for almond trees puts huge pressure on a finite resource. Water is diverted from rivers for farming, which can negatively impact fish, with reports warning of endangered salmon in California at risk from low water levels.

California’s aquifers – giant underground caverns full of water – are also being tapped for farming. These natural water sources took thousands of years to accumulate; now they are being used up faster than they can ever be refilled.

Bees are another concern. Huge colonies are brought in to pollinate almond farms, but they often die from the pesticides.

“It’s like sending bees to war. Many don’t come back,” says Nate Donley, a senior scientist for the Center for Biological Diversity, in a recent report for the Guardian.

Add to this the transportation costs and the packaging, and a packet of almonds becomes an extremely resource-intensive product.

So what’s the best way forward?

Ditch the almond milk, for starters. Oat milk is a much better alternative to dairy. Organic almonds grown in Europe can be pricier but do not use pesticides that can endanger bees.

I love almonds – especially as a healthy 4pm alternative to chocolate – so I don’t think I’ll be giving them up altogether. Instead, I’ll aim to reduce my consumption, go organic and start treating them like the luxury item that they are.