‘We’re the heartbeat of the community’: Small schools battle to stay alive 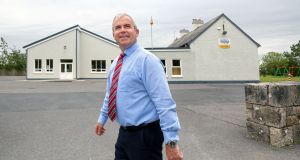 With just one teacher left, it seemed a matter of time before the 160-year-old school shut its doors for good.

“I had no teaching colleagues,” says principal Pádraig Lohan. “I had to teach the children how to use my mobile phone in the event of anything happening to me. I just told them my security code.”

Dozens of schools like Derryoober have closed or amalgamated in recent years.

Lohan, however, is battling alongside the local community to keep the school open.

“The school is the last bastion of identity in the rural area, it’s the heart-beat of the community” says Lohan “We lost the pub, our GP, the local centre, we’ve lost an awful lot ...”

Enrolments are forecast to drop by about 20 per cent between now and 2034, leading to fears of far more closures.

Ireland has the highest proportion of small schools in Europe. Nearly half have four teachers or fewer. However, they account for just 15 per cent of the primary school population.

Most of these schools are in the west where local populations tend to be static or falling, and getting older. There are also local dynamics at play, such as commuting and job patterns.

In a statement, the Department said the new enrolment projections will be used in assessing teacher demand and supply modelling, along with forward planning of school buildings.

A department spokesman said teacher redeployment schemes are aimed at ensuring any surplus teachers are re-located to other schools which have vacancies.

Its official policy is that schools close only with the consent of parents or a board of management.

Labour’s education spokesman Aodhan O Riordain has called for a commitment from the Government that schools will be protected.

“We need assurances that the overall number of teachers employed in the primary school system will be maintained, and not allowed to fall,” he said.

At second level, a projected increase in student numbers poses a different set of challenges.

The Teachers’ Union of Ireland, which represents secondary teachers, said additional teachers will be required in the face if a teacher supply crisis which it says is due to lower pay scales introduced in 2011.

The Irish Primary Principals’ Network said the figures also show the urgent need to boost supports for small schools to ensure their survival.

“We need to look at ideas such as clustering supports or teachers across groups of small schools to ensure they are sustainable into the future,” said network chief executive Pairic Clerkin.

At Derryoober National School, they have done just that.

Lohan says the community came together a few years ago and, instead of accepting closure, they pledged to keep the school alive.

A childcare and after-school facility was built that summer to encourage commuting parents to use it. It operates under licensing agreement with the school patron , the Bishop of Clonfert.

It has had a transformative effect.

By the following September eight children started school, which got numbers above the threshold for a second teacher.

This year, enrolment has risen to 26 children. He is hopeful the numbers can rise to 30 or so in the coming years.

“All our parents both work. That’s the profile. We’re open from 7.40am and the after-school goes on until about 5.45 pm,” says Lohan. There is a breakfast club. There is a hot dinner for the afterschool at about 3pm. The childcare facility stays open during the holidays.”

The death of rural primary schools is not a given, he says.

“It has come full circle now and people are delighted the school is open. We have people actually coming back to the community.”