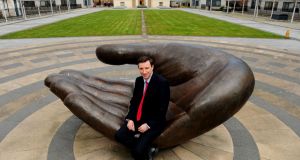 Harold Hislop, department chief inspector, said estimated grades awarded to students by their teachers had only been adjusted by a standardisation process on “solid evidence”. File photograph: Aidan Crawley

The calculated grades awarded to students by some schools and teachers in the Leaving Cert had been a “severe overestimation,” officials from the Department of Education told an Oireachtas committee.

Harold Hislop, department chief inspector, said estimated grades awarded to students by their teachers had only been adjusted by a standardisation process on “solid evidence”.

Mr Hislop told the Oireachtas Committee on Education on Tuesday that “severe overestimation” had taken place in some schools when calculating students’ grades.

“It was very clear when that data came in from schools, that different schools, and different teachers within individual schools, had overestimated the likely performance of students” he told politicians.

It would have been unfair on schools and classes where little or no overestimation had taken place to not downgrade students in those cases where it had, he said.

Dalton Tattan, department assistant secretary general overseeing assessment, said about 17 per cent of grades had been moved down by the standardisation process. In about four per cent of cases the process resulted in students getting higher grades than those estimated by their teachers, he said.

“There was a very high degree of overestimation, particularly in some schools that bore no relation to what typically they would have had in previous years,” he said.

Mr Tattan said some students who felt “aggrieved” at having been downgraded were taking legal cases. Failing to adjust overestimated grades downward “would have created a huge level of unfairness” for other students, he said.

Fine Gael Senator Mary Seery-Kearney said she has been “under siege” with emails from students downgraded by the department’s standardisation process. Schools with a tradition of high achieving students had been “disproportionately downgraded” under the system, she said.

Mr Hislop said overestimation from teachers had been higher when it came to awarding top grades, such as H1s or H2s.

The official said on average 4.7 per cent of students had received H1s over 2017, 2018, and 2019. While under the estimated grading system that figure had increased to 13.8 per cent, before the standardisation process was applied.

“There is no way on earth that students doing agricultural science in 2020 are three times better than their cohorts for 17, 18, and 19,” he said.

The scramble to design a calculated grades system after the Leaving Cert exam was cancelled in May due to Covid-19, had shown “the vulnerability of relying on one exam,” Mr Hislop said.

“If we had other modules of assessment ... over the course of the two year period, you wouldn’t have been relying on a single three hour exam, which we had to cancel,” he said. The experience was “an important lesson for looking at the review of senior cycle in the years to come,” he said.

Some 2,800 students who wished to sit the written Leaving Cert exam will do so from next Monday, and receive their results by next February. Among this cohort are some 200 students who could not receive calculated grades in certain subjects, as they had been studying them outside of school.

Under the calculated grades system students could appeal their results, but not review the estimated grade awarded by their teacher. The appeal only focused on whether data on their grades had been correctly input through the various stages.

Some 12,000 students appealed their grades across 33,000 subjects, and in just 18 cases received an upgrade.

In October a number of errors were discovered in the calculated grades system, and following a review 6,100 students were awarded higher grades. The department is to commission an independent review into the controversy, led by an external company, or an international panel of experts, Mr Tattan said.

The department was determined to hold the conventional Leaving Cert exam in 2021, but given the pandemic “we can’t be absolutely sure,” he said.