Covid-19: Majority feel old way of working not worth the commute - poll 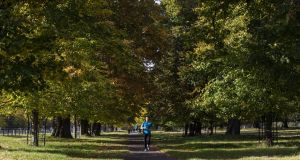 Phoenix Park last month as the leaves on the trees began to change. Photograph: Damien Eagers

Many Irish people do not want to return to the way they worked or commuted before Covid-19 and want a greener alternative. That is according to a national survey of 1,000 adults conducted last month by Science Foundation Ireland to mark Science Week 2020.

Only 6 per cent of Irish people say the old way of working was worth the commute, while almost half – 46 per cent – said they never want to go back to how their workplace was before the pandemic.

One fifth stated that while they did not mind commuting, they would like a greener alternative.

The research was aimed at investigating the public’s views on how science impacts their everyday lives and where they would like to see changes in the future.

This year, the focus for Science Week 2020 is “choosing our future” and supporting conversations among the public on how science can improve our lives.

On the area of health, the research found that over half of respondents said that science or technology has helped their mental health, rising to two-thirds amongst 18-34-year olds. More than three quarters think science has helped elderly people have a better quality of life.

When asked about their hopes for the future and where respondents would like to see science have a positive impact, healthcare came out on top at 82 per cent, followed by climate action at 65 per cent and flexible work options at 43 per cent.

The pandemic also appears to have affected how Irish people think about their lives and how they want to live in the future.

Over two-thirds of respondents agreed that Covid-19 restrictions have led them to appreciate nature more – highest among 18-34-year-olds – with people saying that they want to see more nature in their cities.

More than three quarters of respondents across all demographics stated that they believe Irish cities should have more trees and forested areas.

Commenting on the research, Prof Mark Ferguson, director general of Science Foundation Ireland, said the pandemic has facilitated greater focus on our priorities and conversations around our shared hopes for a brighter future and the vital role science and technology can play in developing solutions to the challenges we face.

“Today’s research provides an opportunity to hear from the Irish public on how Covid-19 has impacted their lives, what do they want to change or keep, and what role can science play in shaping Ireland,” he said.

“Choosing our Future is the theme for Science Week 2020 and core to this is providing the opportunity for the public to engage with the scientific community.”

The foundation is hosting live discussions during Science Week (scienceweek.ie) from November 10th-13th. They will focus on several topics ranging from how we learn to physical activity and its impact on our health, to the future of work and vaccines.